Consequences of Time-Binding (Part I)

With his behavioral definition of humanity and his exponential formula of Progress in hand, Korzybski sought to draw out the social-cultural implications of time-binding. For one thing, he now had an answer to the second question that had bothered him for so long: “Why do our social institutions collapse while bridges mostly don’t?” (Except for some rewriting for brevity, form and order, most of his analysis in the first draft found its way into the published book.)

Our social institutions continued to collapse because of the growing gap between our increasing knowledge of and power over the ‘physical’ world (exemplified by bridge-building technology) and our inadequate and/or inadequately-applied knowledge of ourselves and our social relationships. According to Korzybski, this growing gap accounted to a significant degree for the continuing cycle of wars and revolutions, as humans unsuccessfully attempted to cope with the effects of increasing technological progress. He predicted that more and greater disasters would ensue—collapsing social structures—until humans somehow managed to narrow the divide between science and human affairs.

A major step in narrowing the gap would occur according to Korzybski, when we abandoned supernatural and zoological definitions of ourselves. He insisted that humans could not understand themselves adequately if they continued defining themselves as some additive combination of supernatural (‘soul’,‘spirit’, etc.) and ‘animal’. To Alfred, this view (man as an animal plus a 'divine' spark) appeared to make a comprehensive scientific study of humanity impossible.

Neither could humans understand themselves adequately if they insisted on viewing themselves simply as ‘animals’ destined to play out brutal competitive games for goods and territory. This view—“man is an animal”—diminished humanity and could justify the worst kind of behavior as “survival of the fittest.” Rather, viewing ‘Man’ as a time-binder would naturally include altruism:

..."survival of the fittest” for human beings as such––that is, for time-binders––is survival in time, which means intellectual or spiritual competition, struggle for excellence, for making the best survive. The-fittest-in-time—those who make the best survive––are those who do the most in producing values for all mankind including posterity. (1)

Man As An Exponential Power

In 1920 as he was writing Manhood of Humanity, Korzybski believed that the growth of knowledge in the sciences and technology exemplified time-binding progress. Could he represent this mathematically? If time-binding was cumulative, the result of time-binding in any generation would be proportional to the amount of knowledge already present. This would have to involve an exponential or geometrical function. By early May, he was playing with this kind of progression—Y= 2x—on a piece of scrap stationary that he had already used to draft some letters. On the stationary he also doodled some branching lines whose geometric growth followed the equation. It was a diagram of what 25 years later would become widely known as a “chain reaction”—the secret of the atomic bomb. (1) 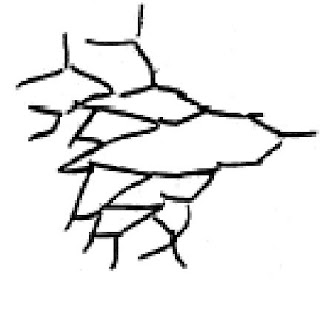 For Korzybski, it seemed that he had gotten to the core of the distinguishing characteristic of humanity: “…a man is some exponential function where the exponent or power is Time.” (2) But what was the specific function? As an examination of both the draft and final versions of the book shows, “Power” was an important term for Korzybski—not only in its limited sense as a mathematical exponent. For him, time-binding involved ‘power’ in both the physical science and the social-cultural senses. The accumulated achievements of past generations provided the present generation with increasing means of power for doing productive work. Starting from the notion of power in physics and extending this into the social-cultural realm led Alfred to what he considered “the natural law for the human class of life.” (3)

In the physics formula for power, P=W/T. P stands for power, W stands for work (defined in term of energy—force times distance) and T stands for time. The formula defines power as the rate at which work (energy) is expended. Multiplying both sides by T gives the formula W=TP, Work equals Time x Power. It seemed to Alfred that if ‘Man’ was a part of the natural universe, human social-cultural life could be understood by extending the framework of such physical terms.

Wealth could be viewed, for example, in terms of work, i.e., as the accumulated work or products of work of previous generations. He made P equal to progress (the accumulated time-bound work inherited from the dead at any point in time). T times P gave it the same kind of unit as W. To account for the growth from one time-binding generation to the next, he brought in a factor R which represented the ratio of progress having the exponent of time—i.e. RT. The time exponent T could be represented most simply by an integer showing the number of generations. Voilà—he had a formula for time-binding—W=TPRT—with Wealth equaling human progress as an exponential function of time.

In the published book, Korzybski dropped T as a factor, and ended up with the basic formula, PRT:

Korzybski theorized that the growth of knowledge in the physical sciences and technology approaches exemplary time-binding. Its relatively high rate of growth seemed to show a rapidly-rising exponential character—its curve growing steeper with each generation of scientists as more and more knowledge accumulated. For the most part, our social/behavioral knowledge—law, politics, economics, morals, human relationships, etc.—did not appear to represent successful time-binding. These areas of knowledge, what Korzybski called the semi-sciences, seemed to grow at a much slower rate, as if in an arithmetical straight line, in comparison with the more rapidly rising geometrical growth curve of science.

Notes
1. Doodle from draft of letters to Charles Armour and the Blackstone Hotel manager, N.d. (probably early May 1920), Alfred Korzybski Digital Archives (IGSDA).
2. The Manhood of Humanity and its Universal Language, Unpublished First Draft of Manhood of Humanity , p. 34. IGSDA.
3. Manhood of Humanity (1921), pp. xii-xiii.
4. Ibid., pp. 110-111.
Posted by Bruce Kodish at 11:17 AM No comments:

Email ThisBlogThis!Share to TwitterShare to FacebookShare to Pinterest
Labels: Manhood of Humanity, Time-Binding

Time-Binding and the Language and Logic of Nature

The definitions of the different classes of life remained somewhat submerged in Korzybski's first draft of Manhood of Humanity. Korzybski chose to spend considerable time discussing mathematics—“the universal language” mentioned in the original title, The Manhood of Humanity and its Universal Language. Much of the detail of this discussion of mathematical thinking in the first draft was subsequently deleted. However, some of it seems worth noting because it highlights, perhaps even more clearly than what eventually got published in the book, some long-standing motivational factors which persisted in influencing Korzybski’s subsequent work.

For Korzybski, the science of human engineering required embracing mathematics as its main helpmate. The processes and products of mathematical reasoning provided a level of security unattainable anywhere else. He indicated this with the introductory quote from Louis Brandeis that he retained in the published book:

“For a while he trampled with impunity on laws human and divine but, as he was obsessed with the delusion that two and two makes five, he fell, at last a victim to the relentless rules of humble Arithmetic.
“Remember, o stranger, Arithmetic is the first of the sciences and the mother of safety.”


Alfred wrote about what continued to be one of the main articles of his scientific credo: that mathematics provides the language and logic of nature, including human nature. As he wrote, this ‘logic’ seems especially tied up with the study of mathematical functions (relations between variables)—the basis of the infinitesmal calculus that his father had introduced to him as a young child. The feel of the calculus had long since permeated Alfred’s view of the world. He tended to look at the world in terms of infinitely-varying functional relationships.

If human life was to be rightly understood and changed for the better, this kind of mathematical thinking had to be applied to human problems. As Alfred saw it, this didn’t necessarily require great complexity or elaborate calculations. Although it became a secondary part of the published version of his first book, the notion of mathematics—or more precisely physical-mathematical method—as a guide to life began to emerge as a major theme in Alfred’s subsequent writings.
Posted by Bruce Kodish at 9:57 AM No comments:

The main formulation of what would become Korzybski’s first published book, Manhood of Humanity (1921), had sprung to him in his sleep one night after years of struggle and study. ‘Man’—a term which Korzybski used in the accepted 1920s sense as equivalent to all humankind, i.e., men, women and children—constitutes the “binding time” class of life. (In the final published version, no doubt under the influence of native English-speaking editors, he changed the term to “time-binding”).

Our symbolic/linguistic capacities allow us humans to ‘bind’ or organize our experiences and/or the products of their experiences so as to transmit and receive from one person and one time to another. Because we have the potential to begin where the prior individual or generation left off, we can benefit from and build upon the experiences of others at an accelerating rate. Even though animals might communicate and transmit their experiences to some extent, the facility that humans have to do this puts us in a qualitatively different dimension from other creatures.

Korzybski finished the first draft of the book rather quickly, possibly within a week or two. He had little in the way of reference books. The most ‘scientific’ book on his sister-in-law’s shelves seems to have been an old copy of Herbert Spencer’s The Principles of Biology. Korzybski’s completed manuscript entitled The Manhood of Humanity and its Universal Language —the language being mathematics—made no direct reference to his friend Charles Ferguson’s program of social reforms, although it seemed in keeping with Ferguson’s goal for a scientific sociology. More specifically, the manuscript explored what Korzybski considered necessary for building an applied science of humanity, a human engineering as he termed it. Human engineering would make conscious use of the human capacity to “bind time” and thus apply it more usefully to all human activities. This would allow humanity as a whole to close the period of its childhood.
Posted by Bruce Kodish at 8:31 PM No comments: