It surprises me that more people interested in what is called "Continental Philosophy" have not pursued the links between the work of Gaston Bachelard and Alfred Korzybski. The formulating of each man connects to and informs that of the other. And the two men actually knew and respected each others' work.

Gaston Bachelard agreed to become an Honorary Trustee of the Institute of General Semantics in 1940. (1) Bachelard’s 1934 book Le Nouvel Esprit Scientifique, which Korzybski had gotten, already showed the French epistemologist as a compatible formulator.

Since he had written that book, Bachelard had come to know Korzybski’s work and to give it considerable importance. The following excerpt (part of a larger discussion of Korzybski and his work) comes from the English translation of Bachelard’s 1940 book La Philosophie du Non: Essai d’une philosophie de nouvel esprit scientifique. (A translation of this done by a student of Korzybski, G. C. Waterston, was published in the U.S. in 1969 as The Philosophy of No: A Philosophy of the New Scientific Mind.):

Those of us who are trying to find new ways of thinking, must direct ourselves towards the most complicated structures. We must take advantage of all the lessons of science, however special they may be, to determine new mental structures. We must realize that the possession of a form of thought is automatically a reform of the mind. We must therefore direct our researches towards a new pedagogy. In this direction, which has attracted us personally for a number of years, we shall take as our guide the very important work of the non-Aristotelian school, founded in America by Korzybski, which is so little known in France. …The psychological and even physiological conditions of a non-Aristotelian logic have been resolutely faced in the great work of Count Alfred Korzybski, Science and Sanity,... [p. 108]. (2)

(2) You can link here to the earlier (1953) J. Samuel Bois translation of Bachelard's full discussion of Korzybski and His Work in The Philosophy of No. The Bois translation appeared in General Semantics Bulletin 12 & 13.
Posted by Bruce Kodish at 11:02 AM No comments: 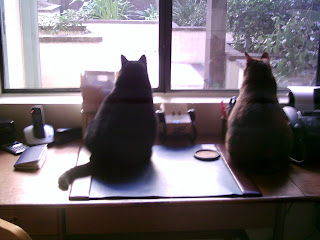 If you insist on putting the cart before the horse, at least only use it to carry your chickens before they're hatched.
Posted by Bruce Kodish at 2:40 PM 2 comments:

About A Word — 'Stimulus'

A lot of news headlines, stories, and editorials have been and are getting written about the economic 'stimulus' package being put through the U.S. Congress now. But 'stimulus' is not descriptive for what Congress is doing at the behest of President Obama. "Massive government spending bill" more accurately describes what they are actually doing.

Why are they in such a hurry to pass legislation (thousands of pages long) that I would guess most senators and representatives haven't thoroughly, carefully and thoughtfully read and considered. Seems like folly to me.

By all means question your beliefs.
But do you also doubt your doubts?
Posted by Bruce Kodish at 9:19 PM No comments:

Email ThisBlogThis!Share to TwitterShare to FacebookShare to Pinterest
Labels: Belief and Doubt

A few down and dirty blogpost notes on a writer-researcher's progress.

Writing-researching the first full-length biography of Alfred Korzybski has been challenging...no, tortuous. Yes, tortuous! But sometimes it's necessary to suffer.

It's an interesting question- why, until now, don't we have a full-length biography of Korzybski? I'm not going to deal with that question right now. But a biography needed to be done. My friend and mentor, Robert P. Pula, the world's preeminent Korzybski and GS scholar before he died had been working on a biography for some time, years in fact, but died unexpectedly early in 2004 before he could finish it.

I decided that I was in a better position than anyone else to pick up the torch from Bob, having studied and worked with him and others at the Institute of General Semantics for years and having absorbed the tradition (some of it oral) that Korzybski started there. Although for a number of reasons I wasn't able to get access to Bob's research materials, I did get some extremely valuable hints from him about some things I would need to study in order to proceed. Now, more than four and a half years after I started, I'm entering the 'home stretch'. Wow!

Or should I say "OY!" I'm now working on the last part of the book. I just finished writing a chapter on the first two years of the Institute of General Semantics (1938-1939), but there's little time to rest. I'm am now starting on the final, very busy—even tumultuous—decade of Korzybski's life: the 1940s. It was the decade when America fought in World War Two, entered the Atomic and Cybernetic Age, and the post-WW2 Cold War. It was the decade that Korzybski tested his theory with large numbers of people to see to what extent it worked. He personally taught and counseled several thousand people, helping them to apply it in their lives. Through his students, many more thousands studied his work in his lifetime. It had a short vogue in the intellectual life of America (and perhaps to a lesser extent elsewhere) before descending into relative obscurity. Still the Institute of General Semantics has managed to survive as an organization into the 21st Century. There is still a world-wide smattering of significant, if all-too-few individuals interested in Korzybski, the man, and in his work which is known by the confusing-to-some label 'general semantics'.

The fact that I've now gotten to the 1940s and am closing in on finishing amazes me. (Korzybski was born in 1879 and died in 1950). He lived the first half of his life in Poland and Europe and the second half in the United States. I've had to read a lot of history, science, mathematics, philosophy, anthropology, linguistics, etc. I've worked from primary source material, letters and original documents, most of which has had very little or no processing or cataloguing by anyone before. I've had to look inside myself too and do some serious, painful 'thinking'. It's been a hell of a lot of work. You have no idea. But I'm nigh sure that a lot of people who are interested in Korzybski and his work—and even some who aren't especially interested now—will want to see what I've uncovered. So I'm looking forward to getting done. Be patient, oh my soul! And, oh my readers!
Posted by Bruce Kodish at 8:39 PM 1 comment:

Unfortunately, too many people go straight from frank ignorance to confident false knowledge.
Posted by Bruce Kodish at 6:08 PM No comments:

A quote to note from my friend, philosophical counselor Lou Marinoff:

Not only is there no end to knowing, there is no end to unknowing. (Philosophical Practice, p. 33)

Posted by Bruce Kodish at 9:51 AM No comments: