Foreword to the Second Edition of Selections from Science and Sanity

In 2010, Lance Strate, then the Executive Director of the Institute of General Semantics (IGS), and Corey Anton, Series Editor of the IGS's New Non-Aristotelian Library Series, asked me to write this "Foreword to the Second Edition" of Korzybski's Selections from Science and Sanity, originally edited by Guthrie Janssen with Korzybski's consultation and approval. Although I would have advertised that fact and posted this much sooner, a number of unforeseen events intervened that kept me from doing so. But given that this is the 80th Anniversary year of the original publication of Science and Sanity, it seems like a good time to remedy that situation. 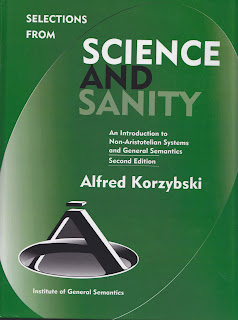 I opine that this new second edition of the authorized abridgment of Korzybski's famous work is not without some graphical design and editorial problems. For one thing, I'm not crazy about the book's large size (11 and 1/2" by 9") or its green cover which I find unattractive. This Second Edition of Selections from Science and Sanity is also missing the original first edition's marginal page references to the unabridged book, which I find regrettable. More seriously, at least one of Korzybski's important diagrams was botched on page 152 by the book designer and appears completely indecipherable. That  designer also originally deleted italics in the text, which Korzybski used for emphasis. This last mistake was later corrected after I pointed it out, but as an writer and editor myself, I know how little slips and creeping errors can corrupt a text, so a thorough editorial run-through with the First Edition seems advisable.

The book can  be purchased from the Institute of General Semantics or from Amazon.com.
Posted by Bruce Kodish at 5:11 PM No comments:

The Unity of Human Problems Through Method

Here's the abstract and a link to a final draft of my keynote presentation at the January 14, 2013, Conference on GS and Transdisciplinary Inquiry at CHM College of the University of Mumbai, Ulhasnagar, Maharashtra, India, organized by Deepa Mishra, PhD.  A conference volume is in the works.

My article includes in complete form, a short and previously unpublished essay by Korzybski's co-worker, M. Kendig, entitled "Note on Unity of Problems Through Method", which provided the title and serves as the connecting theme (I think of it as the 'sauce') of my piece. Thanks, dear Kendig.

Abstract: Interdisciplinary. Transdisciplinary. Where did these notions come from? Rigid boundaries often unduly separate different academic departments and fields. How do we get beyond polite general agreement about the need for transcending these boundaries, and actually do it? Korzybski/General-Semantics scholar Bruce I. Kodish discusses a  little-known discipline that does this explicitly, general semantics, a transdisciplinary discipline, i.e., a discipline with tools applicable across many different disciplines. General Semantics (GS) functions more specifically as a meta-discipline, a discipline that provides a formulational framework and a language for understanding and talking about other disciplines. After discussing the core notion of interdisciplinarity (along with related terms), I’ll present an overview of GS, emphasizing some of its interdisciplinary/transdisciplinary aspects. I’ll conclude with some suggestions for how GS can provide tools for interdisciplinary/transdisciplinary ‘thinking’, for better appreciating and making use of the unity of human problems through method.

The Unity of Human Problems Through Method: Korzybski's General-Semantics as a Transdisciplinary Discipline

From the Stray Thought Bin – 'The Jew'

'The Jew' remains the all-purpose Other.
Posted by Bruce Kodish at 1:14 PM 2 comments:

From the Stray Thought Bin – The Relativity of Values

The world doesn't look the same to a man and a louse.

Posted by Bruce Kodish at 10:05 PM No comments:

The Chain Index, which Korzybski developed in the mid-1940s has significantly bedeviled generations of students of Korzybski's work. "Supermoderator" in the RGS forum has done what I rate as a better job of explaining it than even Korzybski did.

The 'chain' part comes from the analogy to the "chain reaction", for example when there is a doubling or other multipication of some process with each iteration of the process, for example, a nuclear or chemical chain reaction (http://en.wikipedia.org/wiki/Chain_reaction ).


With the chain index, we make our own little chain reaction of differences, of differentiating one thing in our classification or naming, so one thing becomes two things or more depending on the context of time and place (although the time dimension can be taken care of with the device of dating). Further differentiating as to context, can go on indefinitely, although it is probably often not necessary.

Want to join the chain-indexing gang?
Posted by Bruce Kodish at 1:27 PM No comments: