From Korzybski's Scrapbook, 1936 "A Distinguished Visitor"

Korzybski and his wife kept scrapbooks where they pasted newspaper clippings, articles, and other items related to their work. Here is an item from one of Korzybski's scrapbooks from April 1936: the front page of a mimeographed newsletter from the Marlboro State [Psychiatric] Hospital, where Korzybski lectured on April 9 of that year. This was almost three years after the publication of his book Science and Sanity, and two years before the founding of the Institute of General Semantics. The newsletter, the "Marlborogram" appears to have been intended for staff and patients. The account of Korzybski's talk under the heading of "A Distinguished Visitor" seems notable for its brief depiction of his work, which actually manages to convey quite a lot, and jibes with other accounts of his platform presence at the time:

Count Alfred Korzybski delivered a two hour lecture at the hospital before an audience of some fifty people last Thursday afternoon, April 9. Those present included the Staff doctors, representatives from the Central Department and the Business Department, nurses, patients and their friends and relatives. The Count, author of Science and Sanity, gave his lecture in the interests of the work in Semantics which is being developed in the Hospital by one of the Staff doctors.

To many present its was a memorable occasion. The speaker had a dashing and colorful personality. His energy was unbounded. Within the two hour period he gave clearly and forcefully a succinct account of his system of
General Semantics which, in his book Science and Sanity, requires over seven hundred pages for a detailed presentation.

As pointed out by the Count, our difficulties, both personal and public, are caused by false knowledge. Since knowledge is chiefly a question of proper language response, all that is needed to remove false knowledge with its attendant evils is to revise the structure of our present antiquated language with its primitive metaphysics. To do this one has to utilize only three basic facts – 1. the Map is not the Territory, 2. the Map does not cover all the characteristics of the Territory, 3. the Map is Self-Reflexive. What may be said of maps can also be said of Language. Utilizing certain devices from Mathematics, which he declares to be the finest language man has yet produced, one is then able to prepare a map-language which is similar in structure to the world in which we live. And when we have a language similar in structure to our world and our nervous system then false knowledge is removed with its resulting consequences.

Following dinner at the home of Dr. Graves the Count returned in the evening to his residence in New York City.

Posted by Bruce Kodish at 12:45 PM No comments:

In his 1921 book Manhood of Humanity, Korzybski had observed the gap between the advancing scientific/technological progress and the limited social/ethical progress of mankind. Or should I say man-unkind? This gap, he posited would grow and grow and lead to more deadly future disruptions—wars, revolutions, wars, revolutions, etc.—until humanity somehow found how to consciously appropriate its time-binding potential and carry it into all areas of human life, not just science and technology. Indeed, Korzybski's desire to close the deadly gap in human affairs drove him to develop general semantics.

As the Second World War was coming to a close in 1944 and 1945, he felt a certain amount of ruefulness, frustration, pessimism at the waste of human life, the suffering, the destruction of Poland, the mass-murder of European Jewry, the insanity of Nazism, etc. Many people at the time felt similarly. The writer Ben Hecht, contemplating his lost Jewish 'brothers' and 'sisters', sadly expressed it like this, in his bookA Guide for the Bedeviled:

If civilization is to be measured by the progress of human rationality, we can still use the yardstick of the cynic—which is no longer than a sigh.

And yet... Korzybski wasn't inclined to say "people are bad, the world is bad, etc." and thus to sink into depression and despair. As he said 'I was born with a good liver'. He did say this: "The world is hopeless." Unless we as individuals work at changing the way we 'think' about 'things'. Then we might have some legitimate hope. Are we there yet?
Posted by Bruce Kodish at 12:00 PM No comments:

Maps and Territories of the Beijing Olympics 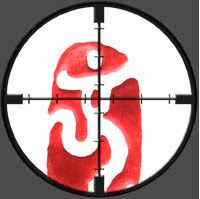 Here you can see the Running Man logo of the Beijing Olympics—in the cross-hairs of a rifle scope.

Do I have your attention now?

Korzybski presented three fundamental new non-aristotelian premises for consciously evaluating humans:
1. A map is not the territory.
2. A map covers not all characteristics of the territory.
3. Mapping constitutes a potentially self-reflexive process, i.e., you can revise a map, i.e., make a map of a map, and a map of that map, etc.

Now when he was talking about maps, he wasn't talking about just geography maps, he was referring to any sort of representation, which could include the images you see on television, movie, newspapers and websites, what someone says or writes, what you perceive when you look out of the window, your favorite or un-favorite belief system, etc.

Korzybski's three premises, interconnected, serve as guides, heuristics that we can use as we navigate through the territory of life because...let's face it, don't fool yourself...you can't navigate without some kind of maps. Premise number 2 reminds us to remember to ask: What is getting left out of this or that particular map? Am I missing something important? What else should I know about what's going on here?

If you've been watching and enjoying the coverage on television of the Beijing Olympics, those questions also apply: What has the coverage left out? And, if there exists some systematic way in which some things have not been covered, how has that happened? and who are responsible?

Mark Alexander has written an article about some important things left out of the mainstream media Olympic coverage. He presents a valuable (in my opinion) map of the maps we have gotten on television and elsewhere. Enjoy the rest of the Olympics this weekend and read China's Porcelain Facade
Posted by Bruce Kodish at 11:46 AM No comments:

"Are You A Skeptic?"

According to the Blogthings Quiz below, I qualify as only a 67% Skeptic. Oh My! Perhaps I answered "not sure" for too many of the questions to get a higher score. Korzybski (who felt rather skeptical about 'skeptics') suggested the wisdom in doubting one's doubt. Some (NOT ALL) of the most dogmatic people I've known were members of skeptic's groups and atheist societies. So I don't feel so bad about not getting 100%. Korzybski File Readers, Let me know how you score if you take the test. I'm curious. — B.I.K.

Are You a Skeptic?
Posted by Bruce Kodish at 3:31 PM 2 comments:

My friend Richard Austin told me about the upcoming "Language of Spirit" conference related to the concerns of David Bohm in Albuquerque starting Saturday through the 12th. Physicist Bohm was fond of reminding people that "a map is not the territory" it represents.

The conference brings together Native American scientists, physicists, and other interested people. Richard has been attending for the past several years.

Another friend, Andy Hilgartner is presenting there this year. You may want to check out the program on their web site Language of Spirit.
Posted by Bruce Kodish at 9:20 AM 1 comment: