Korzybski and the Parable of the Flappers

In 1941, Korzybski was trying to get out the Second Edition of Science and Sanity. The First Edition, published in October 1933, had sold out by the end of 1939. Various problems and delays had occurred since then and Institute of General Semantics now had a large number of back orders to fill.

Korzybski had been working on the “Introduction To The Second Edition,” since sometime in mid-1940. After multiple drafts and much serious editing he had sent it off to the printer, Science Press, late that year. By February 1941, he had received the publisher’s proofs of the "Introduction" and had started another round of editing. (He would finish the "Introduction" in March although further correction of proofs would continue afterwards). He was also working on the “Supplementary Bibliography of the Second Edition,” the new book jacket and was editing the proofs of the rest of the new front and back matter. This included a new page of the volumes of the International Non-aristotelian Library. The books there included one already published (Science and Sanity), those in preparation (including the upcoming Lee and Hayakawa books, Language Habits In Human Affairs and Language In Action, respectively) and the revised list of books whose authors would “be announced later.” Of the fifty-seven titles listed on that page only the three noted above ever got published. (Korzybski could be called naïve but he believed in aiming high.)

He had also selected a new opening epigraph for the book to replace the ‘Fable of the Amoeba’ from The Meaning of Meaning by Ogden and Richards that he had used in the First Edition. This new epigraph, to be placed after the dedication page, expressed even better than the previous one the central message of Korzybski's book. It consisted of several related passages from Chapter II of Part III of Gulliver’s Travels by Jonathan Swift. It described Gulliver’s visit to the flying island of Laputa and his experience with some of its more well-to-do inhabitants. 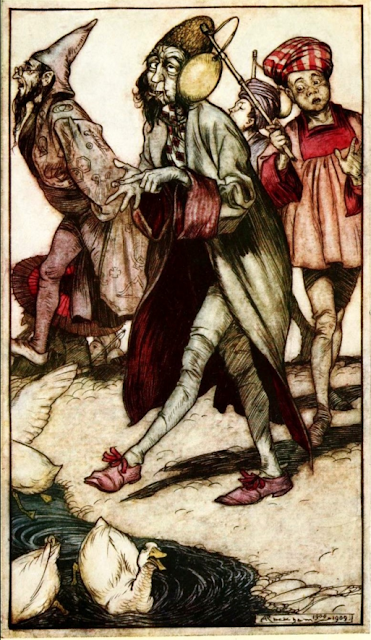 A Laputian Gentleman Taking A Walk

Below I've included the complete quote that Korzybski abstracted:


"At my alighting, I was surrounded with a crowd of people; but those who stood nearest seemed to be of better quality. They beheld me with all the marks and circumstances of wonder, neither, indeed, was I much in their debt ; having never, till then, seen a race of mortals so singular in their shapes, habits, and countenances. Their heads were all reclined either to the right or the left ; one of their eyes turned inward, and the other directly up to the zenith. Their outward garments were adorned with the figures of suns, moons, and stars, interwoven with those of fiddles, flutes, harps, trumpets, guitars, harpsicords, and many other instruments of music, unknown to us in Europe. I observed, here and there, many in the habit of servants, with a blown bladder fastened like a flail to the end of a short stick, which they carried in their hands. In each bladder was a small quantity of dried pease, or little pebbles (as I was afterwards informed). With these bladders they now and then flapped the mouths and ears of those who stood near them, of which practice I could not then conceive the meaning ; it seems, the minds of these people are so taken up with intense speculations, that they neither can speak, nor attend to the discourses of others, without being roused by some external taction upon the organs of speech and hearing; for which reason, those persons, who are able to afford it always keep a flapper (the original is climenole) in their family, as one of their domestics, nor ever walk abroad, or make visits, without him. And the business of this officer is, when two or three more persons are in company, gently to strike with his bladder the mouth of him who is to speak, and the right ear of him or them to whom the speaker addresseth himself. This flapper is likewise employed diligently to attend his master in his walks, and, upon occasion, to give him a soft flap on his eyes, because he is always so wrapped up in cogitation that he is in manifest danger of falling down every precipice, and bouncing his head against every post; and in the streets, of jostling others, or being jostled himself, into the kennel.

It was necessary to give the reader this information, without which he would be at the same loss with me, to understand the proceedings of these people, as they conducted me up the stairs to the top of the island, and from thence to the royal palace. While we were ascending, they forgot several times what they were about, and left me to myself, till their memories were again roused by their flappers; for they appeared altogether unmoved by the sight of my foreign habit and countenance, and by the shouts of the vulgar, whose thoughts and minds were more disengaged.

. . . And although they are dextrous enough upon a piece of paper in the management of the rule, the pencil, and the divider, yet, in the common actions and behaviour of life, I have not seen a more clumsy, awkward, and unhandy people, nor so slow and perplexed in their conceptions upon all other subjects, except those of mathematics and music. They are very bad reasoners, and vehemently given to opposition, unless when they happen to be of the right opinion, which is seldom their case. Imagination, fancy, and invention they are wholly strangers to, nor have any words in their language by which those ideas can be expressed; the whole compass of their thoughts and mind being shut up within the two forementioned sciences ."