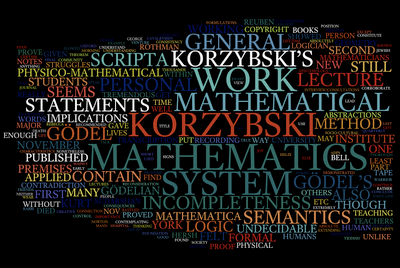 Alfred Korzybski gave a two-lecture series on “Mathematical Method As A Way Of Life” for The Society of Friends of Scripta Mathematica and The Yeshiva Institute of Mathematics at the Horace Mann Auditorium of Teachers College, Columbia University, in New York City, on the evenings of November 3 and November 10 in 1947. The first lecture had the title “On the Structure of Mathematics and Human Evaluation” and the next one “General Semantics as Applied Physico-Mathematical Method.” These lectures would constitute Korzybski’s last major venture specifically addressing a mainly mathematically-oriented audience.

Given his abiding interest in the foundation of mathematics, mathematical logic, etc., it seems disappointing that Korzybski didn’t have anything to say here—nor anywhere else—about logician Kurt Gödel’s theorems of mathematical incompleteness.[1] In work first published in 1931, Gödel had rigorously shown that “Any formal system strong enough to contain arithmetic could never prove its own consistency.”[2] In other words, such a system will contain “undecidable” statements. Furthermore, “If a system of mathematics does not lead into contradiction, then this fact cannot be demonstrated with the procedures of that system.”[3] To do so with such an “incomplete” system, one needed to go ‘up a level’ to a more comprehensive system of axioms which in turn would contain more undecidable statements.

The implications of these notions for working mathematicians and others still get debated in 2010. Nonetheless, I can't easily dismiss the opinions of physicists Tony Rothman and George Sudarshan, who could write in 1998:

"Briefly put, Kurt Gödel proved mathematically that any consistent mathematical system must contain statements that are impossible to prove within that system. In that Gödel’s theorum puts an absolute limit on the effectiveness of mathematics, it is one of the most powerful statements of epistemology." [4]

Korzybski, though not a mathematical logician, got the quarterly journal of the Association for Symbolic Logic and recommended it to his students, so it seems possible that he had at least heard of Gödel’s work, the importance of which by this time had begun to get recognition in the mathematical logic community and among other mathematicians. Korzybski’s friend, E.T. Bell, for example, had given prominent mention to Gödel in his book The Development of Mathematics (published in 1940 with a second edition in 1945), noting in part that

“…Godel constructed a true theorem such that a formal proof of it leads to a contradiction. Undecidable statements exist: within the system certain assertions can be neither proved nor disproved." [5]

This, unlike others of Bell’s books, was not in Korzybski’s personal library but he may have read it.

The implications of Gödelian incompleteness on Korzybski’s formulations about mathematics, and the implications of Korzybski’s work for Gödel’s, both remain to be explored. Gödel’s use of what Korzybski would call “self-reflexiveness” in his proofs showed an area of connection. On the face of it, Gödelian incompleteness seems to corroborate Korzybski’s uncertaintist stance, extending it with rigour into formal systems of mathematics. Gödelian incompleteness also seems to at least require reconsideration of Korzybski long-held view, which he repeated in his second Scripta talk, that “Mathematical abstractions [dealing with fictitious entities and having no physical content] have [by postulation] all characteristics included [unlike physical or daily-life abstractions], and deduction may work there absolutely.”[6]

And contemplating the picture of the emaciated Gödel in 1978, curled up in fetal position in a hospital room, dying from starvation because he believed that someone was poisoning his food [7]; Korzybski's words from his final Scripta lecture on November 10, 1947, seem to apply:

…do not have a criticism, so to say, about my work, that ‘Korzybski fancies that humans are like geometry; there is a difference between geometry and a human being.’ I didn’t find it that way, because I have found that humans, even ‘insane’ are extremely logical provided you trace their premises, except their premises have no realization in actuality. So that’s the main point, not a problem of logic. From some premises, some consequences follow… [8]

Notes
1. I conclude this based on an examination of his notes from the first lecture and a transcript of the second as well as from a rather thorough scouring of his other writings and correspondence, published and unpublished.

Rothman and Sudarshan wrote: "Briefly put, Kurt Gödel proved mathematically that any consistent mathematical system must contain statements that are impossible to prove within that system. In that Gödel’s theorem puts an absolute limit on the effectiveness of mathematics, it is one of the most powerful statements of epistemology."

Milton wrote:
Hi Bruce,
With some audacity as I see it: I agree with the last proposal that "it is one of the most powerful statements of epistemology." But I don't agree with the statement about "absolute limit". Effectiveness is about application -- Application involves a different system and is not mathematics. Also the statement can be seen as a hypothesis, or theory -- to be proven by observation. We can invoke "infinite valued maximum probability" here. Extensionally: There could be absolute limit of mathematical effectiveness. But this has not been proven by Godel's theorem. The limits of a mathematical assertion about mathematics does not put limits on human ingenuity and creativity.

Great story as for me. It would be great to read more about that matter. The only thing I would like to see here is a few pics of any gadgets.
Katherine Flouee
Cell jammer

The Gödelian incompleteness concerns the incompleteness of formalism or formal systems, not the 'incompleteness' of mathematics, whatever that might mean. The incompleteness theorems say nothing about mathematics, which refers to forms of human behavior and human communication, neither of which is constrained by any formalism whatsoever. Mathematics is, as Korzybski often said, human behavior, and human behavior is independent of any and all formalism. See Pieter J. van Heerden's short book entitled "The Foundation of Mathematics" for more details on this. There is also the matter of the relation between formalisms, contentless mathematics, and information theory. In information theory, data is treated as contentless, represented as binary strings, but the implications of this for the foundations of contentless mathematics have escaped the notice of almost everybody interested in the foundation of mathematics (Chaitin's work doesn't count, as he is only interested in using information theory to reformulate the existing work of Gödel and Turing, again on the limits of formalisms,in information theoretic terms). I have much more to say about the issues as part of a book I am now working on that attempts to explicate a new approach to the problem of the foundation of mathematics in Korzybskian psycho-logical terms.

Thanks, Chris. Good luck on your project.