Korzybski: A Biography (Free Online Edition)
Copyright © 2014 (2011) by Bruce I. Kodish
All rights reserved. Copyright material may be quoted verbatim without need for permission from or payment to the copyright holder, provided that attribution is clearly given and that the material quoted is reasonably brief in extent.

Since Ritter didn’t have Russell and Whitehead’s Principia Mathematica available at the Scripps Institute Library, Alfred had made sure to bring a copy of Volume I (the most significant for him). He had borrowed it from Adelaide Smith, a mathematician like Cora Williams, who ran a private school in Berkeley. Miss Smith had little use for the book, while for Alfred it contained keys to what he was trying to formulate. She later let him have it for $5 and he probably felt glad to send her the check since he could then mark up the book as he liked.(1) Korzybski considered it epochal. Despite Russell and Whitehead ultimately falling short in their attempt to derive all of mathematics from logic, their three-volume work (the planned fourth volume on geometry was never produced) had a profound influence on 20th century thinkers in many fields beyond mathematics and logic. In it, mathematics had, in a sense, become conscious of itself. 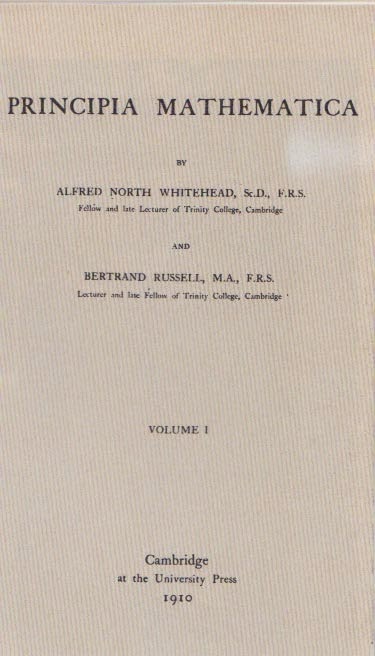 In a 1949 paper, “The New Mathematical Philosophy” read at the Third Congress on General Semantics, physicist-philosopher L. L. Whyte succinctly expressed views about Russell and Whitehead which were highly congruent with Korzybski’s mature attitude about those two men and their work. Whyte suggested,


…what Whitehead and Russell have achieved is to define the form appropriate to fundamental knowledge; but they did not suggest what content should be put into that form. They did not breathe life into the dry bones of mathematical philosophy. That is why there has so far been little general appreciation of the real nature of their achievement, which was to provide a logical technique capable of going deeper into the nature of things, and in that I include both external nature and human thought, than any previous invention of man. (2)


Koryzbski realized something similar about the nature of Whitehead and Russell’s achievement soon after Keyser first introduced him to their work in 1920. And by the end of 1921, building on Keyser’s suggestions in that direction, he felt he would have a chance to really ‘breath some life into those bones’ by showing their relation to time-binding.

A major contribution of Russell and Whitehead was their elaboration of the theory of types (Russell’s creation) to deal with the paradoxes of self-reference in set theory. For example: Did Epiminedes the Cretan tell the truth when he made the statement “All statements by Cretans are false”? The theory of types posited different levels of statements or propositions, providing a way to make distinctions among statements. We make statements and can make statements about our statements—and they aren’t all the same. A class of classes (set of sets) or a proposition about a proposition belonged on a different hierarchical level, had a ‘higher’ logical type, than a simple class (set) or simple proposition.

So a statement or a class referring to itself—Epiminedes the Cretan’s statement about all statements by Cretans—involved a contradiction, an “illegitimate totality” forbidden by Russell’s theory.

Korzybski saw that despite the ad hoc quality of the theory of types, it gave a degree of exactness to—and thus clarified as never before—a profound fact: the existence of a hierarchical ordering process of the human ‘mind’, reflected in its symbolic productions. He also felt the theory contained consequences of practical importance for time-binding that Russell and Whitehead hadn’t explored. Their types could be seen as altered forms of the dimensions he had discussed in Manhood of Humanity and thought about since then. With Russell and Whitehead’s help, it seemed to him he had gotten a little closer to understanding how the confusion of dimensions (types?) as depicted in Manhood, might even exemplify the core of faulty thinking in general. This had tremendous life implications. One didn’t have to make a solid wall between logic and human behavior (was not logic made by humans?). If he was going to better understand and promote time-binding, he needed to better understand the hierarchical nature of types or dimensions. But things didn’t quite fit together yet.

You may download a pdf of all of the book's reference notes (including a note on primary source material and abbreviations used) from the link labeled Notes on the Contents page. The pdf of the Bibliography, linked on the Contents page contains full information on referenced books and articles.
1. AK to Adelaide Smith, 6/5/1922. AKDA 8.204. Years later, Russell visited Korzybski, then in Chicago, and autographed the book for him.

Return to Table of Contents
Posted by Bruce Kodish at 9:55 AM