Pearl seemed to have passed the worst part of her illness. She got married in November 1945 and Alfred, of course, felt delighted at such good news. The end of the year had turned into a busy time for him. Before the Holiday seminar, now an annual event, he and Kendig had gone to San Francisco in late October to give two seminars. Earlier in the year, the United Nations had been founded there, taking over the mantle from the defunct League of Nations as the new international body for promoting world peace. Korzybski wondered how much good it would actually be able to accomplish.

At the end of 1945, the world seemed rather far from the adulthood of humanity—not anywhere close. And it didn’t seem likely to get much closer in Korzybski’s lifetime. The Allied nations had won the war, but he only needed to think of the millions dead, injured, and homeless to get further confirmation that the old aristotelian system remained intact as the ‘thought’ system that ruled the world—‘logical fate’ with a vengeance.

The fate of Poland remained a particular sore spot for him. I imagine him with tears in his eyes when he looked at pictures of his devastated homeland, now under Stalinist control. The front cover of his October 11 copy of The Polish Review showed before and after pictures of the “Royal Castle” on Castle Square, about a forty-five minute walk from his family’s old apartment house. (The Royal Castle had served as the seat of the Polish King and Sejm (Parliament) before the 1795 partition.) The Nazis had deliberately leveled the iconic building shortly after putting down the 1944 Warsaw Uprising. In the foreground, a small human figure stood next to a piece of the toppled pillar of King Zygmunt III lying on the ground. The advancing Soviet Russian army had waited on the other side of the Vistula while the retreating Germans—as their final punishment for Polish resistance—destroyed as much of the rest of Warsaw as they could. When the Russians entered the city in January 1945, most of Korzybski’s hometown lay in ruins. 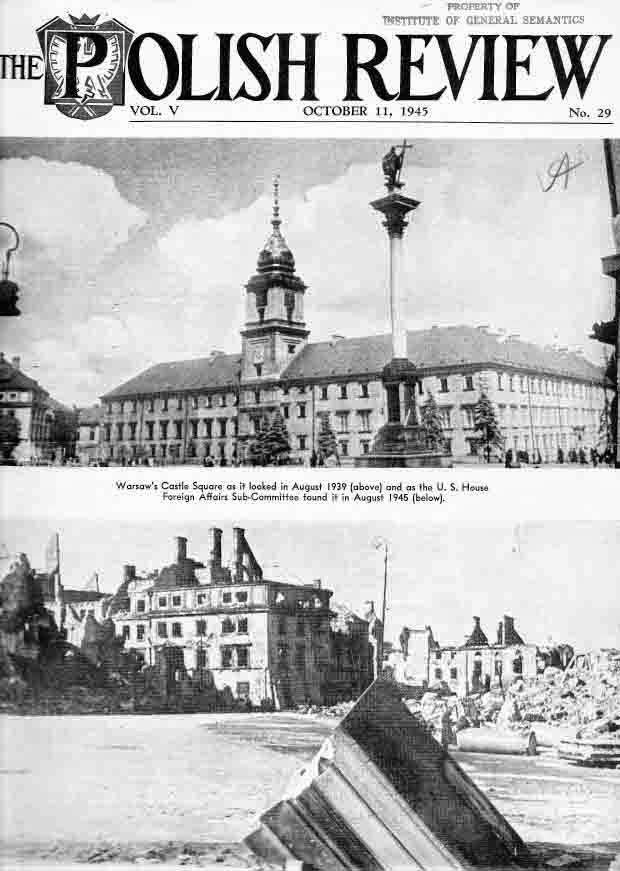 The fate of the Jews after the war remained another sore spot. By the end of 1945, the stories and pictures of death-camp survivors, and of those who hadn’t survived, had already had a number of months to seep into public consciousness. The meticulous German engineering of genocide had begun to be openly revealed at the Nuremburg War Crimes Trials, which started in November. Douglas Kelley had begun working as psychiatrist at the Nuremburg Jail earlier in the year, examining and interviewing many of those who would go on trial. (He would leave after the first month of the proceedings and shortly thereafter write a book, 22 Cells in Nuremberg, about his experiences.) It was becoming clear that the Nazi Germans and their helpers throughout Europe had succeeded in murdering, largely in organized industrial fashion, about six million European Jews, one third of all of world Jewry. Of course, the Nazis had targeted other groups as well, but the sheer number of Jewish victims and the systematic way in which the Germans killed them—simply for the fact of their ‘Jewishness’ as the Nazis defined that characteristic—beggered the imagination. It would take some time, indeed years, for the greater import of the atrocities to sink in—and even then...

Whatever his horror at what had happened, the Nazi atrocities certainly didn’t take Korzybski by surprise. In 1941, in the “Introduction to the Second Edition” of Science and Sanity, he had predicted that Nazi Germany under Hitler would try to destroy the Jews. At the end of 1945 many survivors waited in displaced person camps in Europe while various Jewish organizations tried to lift the British ban on Jewish entry into Palestine or to sneak Jews into Jewish Palestine despite the ban. The Palestinian Jewish community seemed on the way to forming a state, which Korzybski had long supported—having declared himself sympathetic to Zionism in the 1920s. For several years he had been telling many of his Jewish friends and students, and also close friends like Cassius Keyser, that he sincerely believed “world problems can not be solved without solving the Jewish problem,...” And, as he wrote in 1944 to a German Jewish emigre psychiatrist Richard D. Loewenberg, “...the Jewish problem can not be solved on racial or territorial grounds alone...there is nothing else for us to do than to put every kind of international problems on a strictly non-racial neutral impersonal scientific basis, and that’s what we are trying to do.”(21)

Korzybski had been trying to figure out the relation of Jews and Judaism to him and his work for quite some time—at least since 1920, when he became conscious of the antisemitism he had absorbed and succumbed to, however superficially, by that time. He had had to work to overcome it in himself. (Perhaps this provided one reason for his heightened sensitivity and early recognition to the dangers of Hitlerism.) But he clearly hadn’t figured out a solution to what he called “the Jewish problem” even now—except in these most general terms. He had recognized strong non-aristotelian elements in the Jewish tradition and he strongly felt that somehow both Jews and Gentiles would have to come to terms with what that meant in more detail—as would he.

You may download a pdf of all of the book's reference notes (including a note on primary source material and abbreviations used) from the link labeled Notes on the Contents page. The pdf of the Bibliography, linked on the Contents page contains full information on referenced books and articles.
21. AK to Richard D. Loewenberg, Feb. 3, 1944. IGS Archives.

Return to Table of Contents
Posted by Bruce Kodish at 7:11 PM