In mid-September, done with the seminar-workshop and interviews, Korzybski, Kendig and two new Institute staffers moved to the Lime Rock Lodge in Lime Rock, a Northwestern Connecticut village too small to have a post office of its own, located about five miles east of Lakeville, the nearby ‘big’ town with a post office. Korzybski felt bereft without his desk, most of his books, papers, and records. Meanwhile, Charlotte had returned to Chicago with Guthrie Janssen to check up on the materials in storage, on the two Institute employees still working at the makeshift Chicago office, and on Mira. Then they loaded up the Institute’s 1938 Ford with as many suitcases they could fit for the drive back to Connecticut. The question remained: where would the Institute go?

Even with no home for the Institute, expenses accumulating, and money getting low, Korzybski wasn’t one to get morose. As usual he kept busy working. He had just finished his initial editing of an outstanding presentation on “General Semantics Utilized As An Auxiliary To Psychotherapy” for a forthcoming book on Brief Psychotherapy: A Handbook for Physicians On The Clinical Aspects of Neuroses sent to him by Bertrand S. Frohman, an internist/psychiatrist from Beverly Hills, California. Frohman had completed most of the book with his wife Evelyn when he encountered Science and Sanity. He later told Korzybski, “We relabeled the manuscript “incomplete”, set it aside, and dug in for a period of study and application of General Semantics.” This resulted in delaying publication until they had revised the entire book.(47)  (It finally got published in early 1948.) Korzybski offered minor comments to tighten up the language; but what he read tremendously impressed him. Frohman, someone he had not personally met, had finally produced the book that Alfred for so long wanted to see from one of his psychiatrist students. Already extensionally oriented, as he said, by “instinct”, Frohman had made himself one of Korzybski’s most careful students.

Besides this, Korzybski was finishing up an article on “General Semantics” that the Encyclopedia Britannica had asked him to do for Ten Eventful Years, an upcoming 1947 supplement. Nelson’s Encyclopedia (later renamed The American People’s Encyclopedia) based in Chicago had also just invited him to submit an article; for starters he would send them what he had written for the Britannica. All of this interest in his work must have bolstered his mood, as the success of the seminar-workshop surely had done.

Within the first few weeks of October, the Institute had a new home. Kendig sold her mother’s property in Pound Ridge, New York and bought the Barnum House, a run-down, 100 year old mansion on White Hollow Road across the creek from the Lime Rock Lodge. Built by a relative of circus showman P.T. Barnum, the large three-story house with attached garage had several acres of garden and grounds. It needed a great deal of work but would give Kendig a place to live and store her possessions, now scattered amongst a number of places, and would provide a home for the Institute—and for Alfred and Charlotte as well—until they could relocate closer to ‘civilization’. Kendig would charge the Institute a nominal rent.

While awaiting remodeling to be done, they rented a small office across the street from the Lime Rock Lodge but did much of their work from their temporary living quarters at the Lodge, which had begun to feel very “small and inconvenient”, as Korzybski wrote to Ken Keyes: “You can imagine the beauty of the situation, carrying the main work here in Lakeville, where we have to spread correspondence on beds and reorganize the whole thing every evening and morning, never being able to put our hands on anything.”(48) They would move into the house in December. Within a year, they had transferred most of the files, records, inventory, library, private furniture, etc., from Chicago. Kendig also had to move antiques and furniture from her mother’s place. Though the stay there was planned as only a temporary hiatus, the Institute remained in the old house in Lime Rock (with a Lakeville post office box) for 39 years.

The house’s location had benefits but seemed far from ideal. They had no space in the house for giving seminars, although they did have the use of the Lime Rock Lodge, Indian Mountain School, or the numerous nearby private schools and inns as seminar venues—of course with the added inconvenience. New York City was fairly easy to reach 100 miles away. They were even closer to Hartford, New Haven, Poughkeepsie, etc., yet far enough from city life to make them feel at times more isolated than they would have liked. In the Litchfield Hills (part of the foothills of the Berkshire Mountains) overlooking Salmon Creek, the springtime and fall could seem beautiful, as could the winter with its new fallen snow. But the weather often became forbidding. Winters could get very cold, too cold to start the car, and sometimes socked them in with major blizzards: the snow too deep to drive through and, once melted, leaving the long driveway to the road a muddy impasse. Summers could get very hot and Korzybski noticed a peculiar dampness throughout much of the year, which he attributed to the low valley they lay in, and which he believed promoted the muscle cramps that sometimes kept him from sleeping. 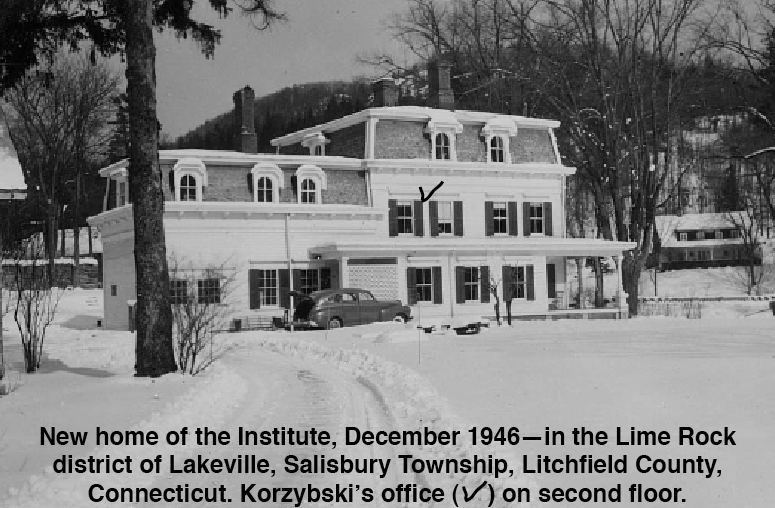 The old house itself, though adequate, also had its share of problems. Something always seemed to need maintenance or to break down, like the hot water tank that stopped working the following spring and had Charlotte dreaming of hot baths. The basement had room for files, cabinets, and the book/publication inventory but could get damp and even flood if the sump pump didn’t work, so water damage remained a constant threat, with things more than once having to get moved out. The place in general could seem jam-packed with people and stuff. A large front room, alongside the first floor parlor off the front entry hall, got turned into the main office where Kendig, her secretary, and Hansell Baugh all had desks. Behind stood a room filled with clerical desks and files; a dining room actually occasionally used for dining; and at the back of the hall, a little closer to the stairs to the second floor, Charlotte’s desk. (Kendig and Charlotte would have cherished the quiet and privacy of separate offices but there simply didn’t exist any convenient place to spare for them.) In back, they had a large kitchen with a long center counter and behind this an attached garage. On the second floor, Kendig and Charlotte had front bedrooms across the hall from each other. Behind the stairs, Korzybski had his office, directly across from which, behind Charlotte’s room, stood his bedroom with its own bath. Further back and across the hall from each other, two “Horror Rooms” were filled with Institute stuff that had nowhere else to get plunked, apparently in such quantity and disorder that people were later simply warned to stay out. In the rear of the second floor stood a separate hall bathroom and more storage, as well as the back stairs, utility spaces, etc. The third floor held the library, a small bedroom, a bathroom, and a couple of spare rooms for storage. Korzybski wrote to Mira the following year that although he and his housemates got along with each other, they all felt very crowded, working and living ‘hanging on each others necks’.(49)

Korzybski didn’t consider the move to Connecticut necessarily permanent. New York City or a similar more urban environment would suit the Institute better, if they could come to afford it. There was also the issue of Mira. He wouldn’t have wanted her to stay in the Lime Rock house so close to Institute goings-on. And given her arthritis and general health, he didn’t think the weather there would suit her. With the Institute in New York, they could get an apartment for her in the city where he could see her at least once a month and where she could have reasonable access to necessary medical care. In the meantime, Mira seemed reasonably comfortable in her Chicago apartment, with free medical care at Billings providing an added inducement for her to stay put. And in the meantime, Kendig’s house would serve as his and the Institute’s home. (Some hope of moving revived in 1949, with a potential buyer for the house, but this ultimately didn’t work out.) Over the next few years, traveling for both Alfred and Mira became more difficult and although they stayed in close contact by letter, supplemented occasionally by telephone calls (not so good for Alfred because of his deafness), they would only see each other a few more times before he died. One might note with irony, even a tinge of sadness, that the couple—now reconciled with each other—were forced by circumstances to live so far apart. The old house in Lime Rock would become Korzybski’s final home.

You may download a pdf of all of the book's reference notes (including a note on primary source material and abbreviations used) from the link labeled Notes on the Contents page. The pdf of the Bibliography, linked on the Contents page contains full information on referenced books and articles.
47. Bertrand S. Frohman to AK, 2/21/1948. IGS Archives.

Return to Table of Contents
Posted by Bruce Kodish at 7:30 PM