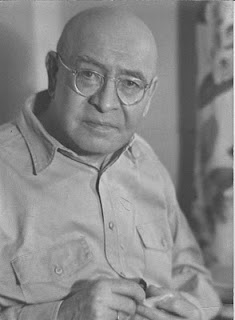 Today, March 1, 2010 marks the 60th anniversary of the death of Korzybski— as Sam Bois said, one of 'les grands coeurs' or 'great hearts' of civilization.

He died early in the morning of March 1, having collapsed on the evening of the day before while working at his desk. The details of his death, of considerable interest, take up much of the first chapter of my biography of him, a chapter which covers the last day of his life. In general terms, his associate, M. Kendig, wrote soon after his death about what happened:

The circumstances of his death, it so happened, were symbolic of his life and work. In working with students, he exhibited a tremendous power of caring about any individual bit of humanity before him. He was continuously aware that some infantile evaluation he might be struggling to change in an individual mirrored a symptom from the social syndrome. He spent the last few hours of his life at his desk working on such a problem. (1)

Finding out the details of what happened took a bit of detective work on my part. I uncovered a dramatic story. But I'm not going to tell it here. You'll have to read the book.

In the meantime, let's drink a toast to the memory of Alfred Korzybski. May his memory endure and the work he began continue and prosper.

I'll drink to that! L'chaim!

Stop drinking! Get back to work, I need you to finish this book, I liked your last one so much. And don't get writers block!