While he was in San Antonio, one of the local newspapers had carried a quadruple headlined story about Alfred—"Polish Officer Has Served In Three Armies. Lieutenant Karzybski [sic] Now Wishes to Help Uncle Sam Win the War. Mine Coal, His Plea. He Speaks Seven Languages and Talks to Miners in Native Tongue.”(33) By now this kind of coverage had become somewhat routine for Korzybski. Reporters tended to find him, "a remarkably interesting man”.(34) His background as a Polish nobleman and soldier added to his appeal and his work as a public speaker for the government added to his news value. As he developed his work in later years, he would continue to get press coverage—not all of it welcome. Whether complimentary or not, he remained interested enough in what got written about him to clip the articles and later to employ clipping services to keep tabs on pieces about him, and reviews of his work. 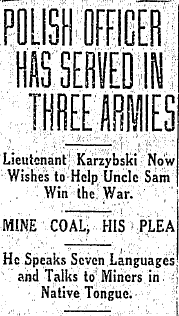 At the Laredo conference, he met Samuel Gompers, a man he came to admire. Korzybski characteristically came prepared, having researched Mexican miners’ problems. He had wanted to speak about what he considered to be the negative influence of the Bolsheviks and the I.W.W.—a radical labor organization at odds with Gompers’ group—in fomenting discontent among these workers. Alfred had some ideas about alternative ways of promoting fraternity among the nations of the world, but he couldn't get an official place on the program. He tried to have his say anyway. He considered it ironic: he, a Polish national, was “representing [the] United States government in a Pan-American Congress of labor.”

Referring to a picture of the attendees, he said:


Everybody there looks like a criminal, and you will recognize me easily because I was the only one in a uniform. I also was so damn sick of the whole group, South American sort of communists, anarchists, I don’t know what not, and poor old Gompers [who had just lost his daughter to influenza]...conservative, solid man and here dealing with us crackpots, you know. And I had to address that group in the name of the American government. By jove, I did my best, but I was so sorry and bitter that I don’t believe I did any good. I believe...that the Laredo meeting was one of the last which I had in the government service in this war.(35)


Notes
You may download a pdf of all of the book's reference notes (including a note on primary source material and abbreviations used) from the link labeled Notes on the Contents page. The pdf of the Bibliography, linked on the Contents page contains full information on referenced books and articles.
33. San Antonio Light, Thursday, November 7, 1918. AKDA 1.39.

Return to Table of Contents
Posted by Bruce Kodish at 7:44 AM