At the National Arts Club, Korzybski soon made contact with the writer Charles Ferguson, who had been living there. Ferguson, trained as a lawyer, and a former Episcopal and then Unitarian minister, had written a number of books and articles on social and economic reform and had traveled to Europe and Asia on study missions for President Wilson and the U.S. State Department. In New York, Ferguson had gotten involved with a circle of people centered around the industrial engineer, H. L. Gantt, whom Korzybski met just before Gantt’s sudden death from food poisoning at the end of 1919. (Gantt gave Alfred a signed copy of his last book Organizing for Work.) (17)

Gantt, considered one of the founders of Project Management, had earlier worked with Frederick W. Taylor, who founded the discipline of “Scientific Management”. Gantt had developed a method of charting found useful for large-scale industrial planning (indeed, it is still being used today). Ferguson, Gantt and others, mostly members of the American Society of Mechanical Engineers, had hopes of applying this and other methods of industrial engineering to social problems and had formed an organization in 1916 called “The New Machine”, later called “The Technarchy”. This group had a natural attraction for Alfred, with his engineering bent and his urgency for political-social-economic reform. Korzybski became friendly with Ferguson and began to read his work. 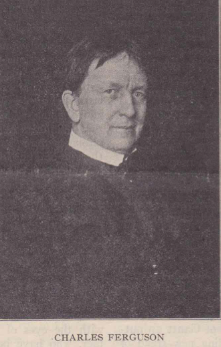 In Ferguson’s 1915 book, The Great News, he had coined the term “social credit” to label his own and related notions of economic reform developed by the English writer C. H. Douglas and others. In their view, cooperatives, under the advice of scientists and engineers, could wrest control of the credit system from bankers in order to ensure a more equitable distribution of buying power. Shortly, Korzybski became enthralled with Ferguson’s ideas and, for a time, seriously advocated them, recommending Ferguson’s 1918 book, The Revolution Absolute, to friends and correspondents.

Alfred may have rejected what he saw as the extremes of capitalistic commercialism but he also viewed socialism as unrealistic though he did seem to find it appealing. As can be seen in his “Profiteers” article, he already had an interest in cooperative economics and saw in Ferguson’s book a theoretical basis for the co-op movement—a kind of “social capitalism”—which he hoped could become strengthened in Poland and elsewhere.

At this time, Korzybski also had an interest in the efforts of Glenn Plumb, an attorney for the Railworker’s Union, who had formed an organization dedicated to nationalizing the U.S. railway system. The railroads would be purchased by the federal government with funds from a bond issue. The government would then lease them for an extended period of time to a managing organization made up of representatives from the government, present management, and railroad workers. The “Plumb Plan” was criticized as a move toward Bolshevism and never materialized. Korzybski had hoped to get Plumb together with Ferguson and Samuel Gompers, but was unable to arrange a meeting.

By the fall, Mira and Alfred had decided to put off the trip to Poland—the first of many times they did so. He had applied to become a manufacturer’s representative in Poland for International Harvester and for Ford Motor Company. They turned him down. But he was still looking for business opportunities which would enable him to inject something useful into the Polish economy while making a living there.

In the meantime, Korzybski threw his considerable energy into the cause of the “New Machine”. Perhaps there was some way to use Polish community resources in the U.S. and Canada to finance and create cooperative enterprises in Poland. Promoting Ferguson’s work might help inspire such activities. Alfred participated in several meetings of the New Machine which were held in New York. He was full of ideas. He contemplated editing a shortened version of The Revolution Absolute with added commentary by himself, and also doing a Polish translation of the work. Ferguson was grateful for Alfred’s offers to promote his work and eventually gave him translation rights to the book. He inscribed the following in Alfred’s copy of The Revolution Absolute:

To Alfred Korzybski Soldier–Publicist, living spokesman of the dead who have been slain by the abominable politics—a man who thinks with emotion and feels with discretion, and so is fit for the greatest things. With affection and gratitude for wise counsils [sic].(18)


At the end of September, Alfred had occasion for severe disappointment. The U.S. Senate struck down the proposed Peace Treaty in a test vote. The sticking point had been U.S. membership in the League of Nations (the Treaty and the League were definitively voted down in November). A few days later, President Wilson—whom Alfred greatly admired—had to cut short his nationwide speaking tour promoting the Treaty, after suffering a stroke. (Amazingly, Wilson—bedridden and severely disabled—continued serving as President until the end of his term in March 1921, his wife and staff maintaining a kind of surrogate presidency in his name.) Notwithstanding these events, Washington was made the site of a League of Nations’ International Labor Conference starting at the end of October. Alfred was selected to serve the Polish delegation as a secretary.

You may download a pdf of all of the book's reference notes (including a note on primary source material and abbreviations used) from the link labeled Notes on the Contents page. The pdf of the Bibliography, linked on the Contents page contains full information on referenced books and articles.
17. IGS Library-Ft. Worth, Texas.

Return to Table of Contents
Posted by Bruce Kodish at 10:51 AM