It seemed clear; nothing much was going to happen with his inventions anytime soon. Korzybski left Ottawa near the beginning of May 1917 and moved to New York City, where he had friends. He also had some remaining connections with the Russian—no longer Imperial—Artillery Commission. He was asked to work as their chief inspector at the Brooklyn waterfront where they were having serious difficulties loading ammunition shipments destined for Russia. All the men previously assigned to the job had quit after one or two weeks. Alfred agreed to do it. 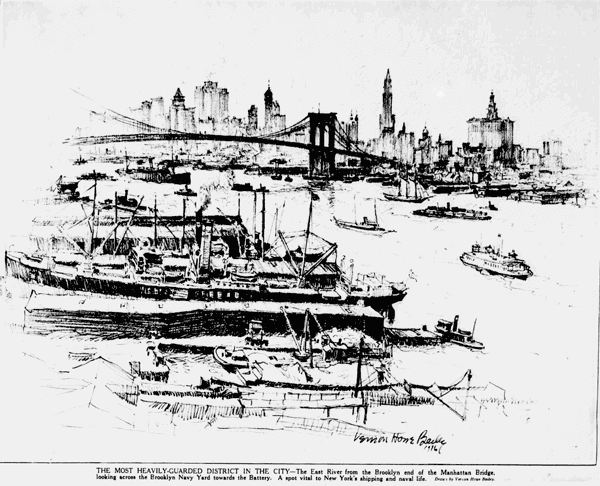 Some ships were getting loaded from smaller freighters. Korzybski, given a little motor boat he could use to putt-putt around the harbor, went to talk to the junior supervisors overseeing the work on one of the ships. He asked how things were going. Terrible—they told him—the longshoremen were disobeying them and, as a result, dangerously mishandling volatile ammunition. Korzybski watched the work being done for about twenty minutes and confirmed what the inspectors had said. Then he went to speak to the dockworkers' foreman whom Korzybski described as “a New York Harbor roughneck”.(3) Korzybski told him that his men would have to start listening to the Russian inspectors who wanted to make sure the ammunition got loaded in a safe manner. The foreman brushed him off. Realizing he would get nowhere with the man, Korzybski proceeded to the office of the ship's Captain.

The Captain accepted his credentials and greeted him warmly. When he heard Korzybski’s concerns, he said that loading the ammunition on the ship was not his business but a matter between the Russian government and the private company the longshoremen worked for. “Then I asked the Captain just a simple question: ‘Captain, do you wish to be blown up?’” Korzybski had gotten his attention:

I made a gesture of the ship being blown up going into the air and I told him, “By ‘blown up’ I mean blown up.” Then I showed my hands going into the air, “A big puff and it’s all over. That’s all I mean by blowing up.”

I told him I was never more serious in my life.

Korzybski quickly devised a plan. The work depended on steam. The longshoremen used steam-powered machinery to do their loading. If the steam stopped, the workmen would not be able to earn their money. And the Captain controlled the supply of steam. The Captain would have someone wait for a signal from Alfred, who would—if necessary—wave his handkerchief to indicate he wanted the steam turned off. And the Captain would then order the steam off. Alfred returned to speak to the foreman and quietly repeated his request. The foreman told him to go to hell.

I said nothing. I just took my hankie and waved. Suddenly, of course, the steam stopped. Means the whole loading stopped. [The foreman] and all the workers said, “What happened? What happened?” Then I [said]—I won’t repeat…what I said. I used good military language then because I had him by the neck. “You so and so and so”—it was a long list. I was quite expert at it. I had learned from the Canadian and British soldiers. "Will you obey, you so and so?" Well, he was terrified by the expediency of stopping the steam. Not my so and so stuff. So immediately the whole thing changed. It means the man began to obey orders of my men…When the ships were loaded, they went…and when the ships were changed I had to flirt that way with [each] captain, [i.e.,] make that arrangement that when I wave my handkerchief the loading stops. That’s all and then I [took] care of the rest. So the whole thing was organized. It went beautifully... I reported to my general[s], how I solved it. To them it was a miracle. Somehow it solved the problem. This was inherited by my successors. They were told how to solve the situation. It solved the problem completely.(5)


After a few months, Alfred was also out of a job. In the meantime, he had some money to tide him over. He had found an apartment in Manhattan on 21st Street, where he had moved after first living in Brooklyn, and then coming to his friend Sobanski on 15th Street. Alfred had few possessions beside some items of clothing. He had brought only a few things with him from Poland. These included some pictures from home, some uniforms, his cavalry saber and spurs, and his credentials and letters of recommendation related to his various positions on the Eastern Front. He also had a small, but growing collection of books , music scores, and document files—including letters, recommendations, newspaper clippings, calendars, memos, bills, etc.—he’d gathered since he came to North America. He typed almost all his letters and made carbon-copies of nearly every one he wrote, saving them along with the letters he received. He had found it useful to have a record of what he had done and of his communications with others. In subsequent years the files and books would accumulate. Undoubtedly, storing them presented difficulties at times but he had systematic habits and was able to keep things more or less organized.

Notes
You may download a pdf of all of the book's reference notes (including a note on primary source material and abbreviations used) from the link labeled Notes on the Contents page. The pdf of the Bibliography, linked on the Contents page contains full information on referenced books and articles.
4. Korzybski 1947, p. 171.


Return to Table of Contents
Posted by Bruce Kodish at 11:44 AM