September had come. Given the uncertainties of the Russian government and its war effort, he felt relief that the U.S. had entered the war and that the U.S. Army was in the process of mobilizing men and resources to join its allies in Europe. Despite the horrors he had witnessed on the Eastern Front, despite the terrible waste of life in the bloody maw of the Great War, he was neither a pacifist nor neutral. He considered the future of Poland and Polish culture, among other things, at stake. He had already paid his dues with his war service but he wanted—needed—to do more. In July he had tried to enlist at the British Recruitment Center in New York but had not passed the physical.(6) Now, he saw a newspaper notice: “MEN wanted (50), bet. 25 and 40 yrs. for Intelligence Corps, National Army; must speak French fluently; former investigating experience desirable; good pay and allowances. Call or write, Army Recruiting Station, 280 Broadway, New York.”(7) Alfred saw an opportunity to help. He immediately sent a letter to the recruiting office. After describing his background, language skills, and prior war service, he requested a job.

...I am not able to fight on account of an accident with a horse and Wounds, so I am perfectly free to accept work. Misfortunately it must be in the rear. As is shown in my documents, I am discharged from the Russian service and have the right to apply to the armies of the Allies. I can be useful as interpreter at the front, or as censor, having practice and knowing well what news can be useful to the enemy. I know that for positions that are not directly in the firing line the vacancies are always taken in advance, but I suppose that a man who has offered all he had to the war and is not able for front service and can be very useful having knowledge capacities and experience may have the right to apply for a position. …I remain Sir your obedient servant (8)

In a few days he got a reply from the Chief of the Military Intelligence section of the War Department in Washington D.C., where his letter had been forwarded. The Lieutenant Colonel respectfully turned down his offer. They already had more applicants than they needed.(9)

Alfred continued looking for employment. Finally, he landed another job with the Russian government. Horses had continued to provide one of the main forms of military transport (an estimated eight million horses died by the end of the war) and the Russians needed horseshoes in large numbers. The Russian Supply Commission in America contracted in July with The U.S. Horseshoe Company to obtain at least several thousand of them. Now, there were problems with getting the job completed and the Supply Commission needed someone to deal with the company. Korzybski was appointed as Chief Inspector and went to Erie, Pennsylvania sometime in October or the first few days of November. He knew almost nothing about manufacturing horseshoes.(10) 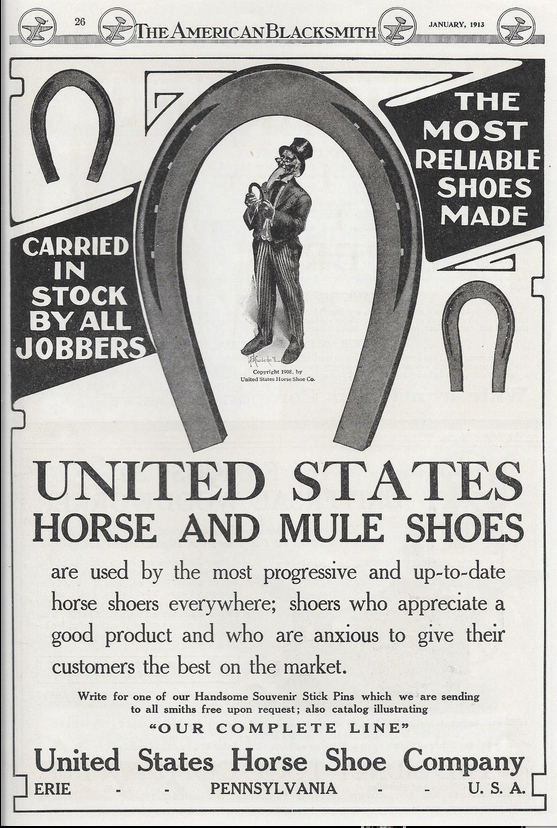 After meeting L. E. McElroy, the President of the company, he spent his first few days there simply walking around the factory and observing the operation. The company had lost many of its older and most qualified workers through the military draft. It had also been hit with a number of strikes. he could see significant disarray in the operation. For one thing, workers seemed to have no system for separating good horseshoes from rejects. They mixed piles of both on the shop floor, which meant good shoes could get thrown away as scrap while bad shoes got packed.

Once he started inspecting lots of completed shoes, he found more problems. The shoes were already packed in barrels before he was able to inspect them. So he had to unpack them by hand—a dirty, time-intensive job. The condition of the packing room and the inspection room he used appeared chaotic. He found a large percentage of the shoes he unpacked of sub-standard quality. He had to send them back. Completion of the order was getting further delayed. The company would not be able to finish the job by the agreed-upon deadline in November. Initially there may have been some tension between him and McElroy, who had to request a time extension from the Russian commission. However, McElroy soon realized that Alfred was simply concerned about the quality of the product and would do whatever it took to help the company get the job done properly.

Alfred had discovered some other production problems at the plant. Some parts of the shoes were too thin, which he attributed to the metal getting cut poorly. In addition, many nail holes appeared poorly placed in the smaller shoes. The holes, made with a punch machine, needed to be placed centrally, away from the edge of the metal, to keep a shoe from breaking. This was not getting done consistently. It may have seemed like a little thing, but he took the placement of the holes quite seriously, since he knew the consequences of a horse breaking its shoe and getting hobbled on the battlefront.(11) He also saw a problem with the shoes getting packed in old fertilizer bags before being put in the barrels. The acids from the unwashed bags could corrode the metal of the shoes.

Korzybski made specific suggestions to McElroy for each of the problems he uncovered. To assist with quality control, Korzybski invented an automatic horseshoe holder/counter made of a simple, round iron base and a screwed-in wire handle. The base and handle were constructed for the circumference and thickness of various sizes of shoes, so a production  worker could fit, say, 100 shoes of one particular type onto an appropriately-sized counter. The counter was labeled with the name of the worker and carried into the packing area, where the shoes could be easily inspected and recounted as necessary before packing.

By early December, the Russian contract had been completed. Because of railroad delays, all of the horseshoes couldn’t be sent to New York at once. Alfred stayed a little longer to arrange the shipments. When he left Erie, he had been at United States Horse Shoe for two months and had helped reorganize the entire operation of the factory. Both the Russians and McElroy were happy and wrote him glowing recommendation letters. In addition, McElroy had become intrigued with Alfred’s iron-tire repair kit and agreed to build a prototype. If they could get some outside concerns interested in it, he even seemed willing to become the manufacturer. Despite his support, nobody else seemed much interested. McElroy corresponded with Korzybski into the following year but by early 1918, Korzybski had little time or energy to invest in marketing the device. He was involved in other things.

You may download a pdf of all of the book's reference notes (including a note on primary source material and abbreviations used) from the link labeled Notes on the Contents page. The pdf of the Bibliography, linked on the Contents page contains full information on referenced books and articles.
6. Scrapbook of Alfred Korzybski. AKDA 3.324.

11. An old nursery rhyme reflects the potential importance of a 'little thing' like a horseshoe nailhole:


For want of a nail, the shoe was lost;

For want of the shoe, the horse was lost;

For want of the horse, the rider was lost;

For want of the rider, the battle was lost;

For want of the battle, the kingdom was lost;

And all for the want of a horseshoe nail.


Return to Table of Contents
Posted by Bruce Kodish at 8:56 AM