Alfred had spent a huge amount of time and effort cultivating Philip Graven. Graven’s comments and the psychiatric case histories he had accumulated over the last six years could prove invaluable in showing the practical application of Alfred’s work. Yet it seemed more and more likely that Graven was not going to be able to come through with the material when Alfred needed it. Alfred had last heard from him in the middle of January. In the next month and a half, he wrote a number of letters to him; Graven made no reply. This was following an all too familiar pattern. On March 7, Alfred sent him the following telegram message:


Your silence is extremely distressing and harmful to me Must know immediately whether I can depend on your supplement or not stop. Shall I use your first letter for extracts stop. Can I expect a translation of Tramer's letter stop am awaiting urgent decisions from you over one month. (4)

On the following day, Graven sent a telegram to Korzybski: 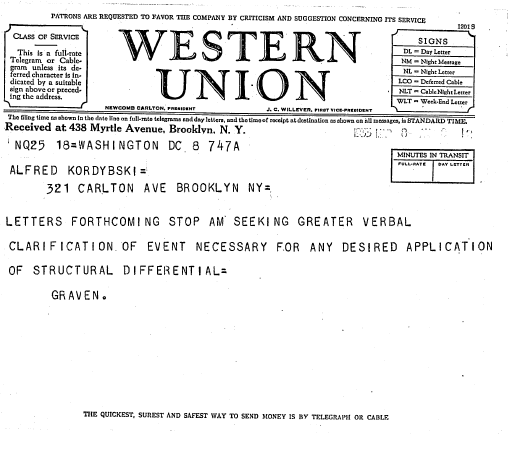 Korzybski, who rightly may have felt puzzled and distressed to read this, wrote back to Graven at once, answering with great patience. It seemed to him Graven was getting stuck, once again trying to get a finalistic answer to a question full of ‘metaphysical’ difficulties nobody could answer definitively. For Korzybski’s purposes it seemed enough to say that the ‘event’ represented “a process, a sort say of wriggling jellfish which means a FOUR-dimensional affair...If you try to go beyond that you are lost completely as you touch unsolved physico-mathematical problems which for practical purposes is entirely unnecessary.”(6)  Two weeks went by with no response from Graven. Korzybski wrote to him again on March 24:


The way you treat me is genuinely painful, and I do not understand it at all...Do you realize that not knowing where I am with you and that anxiety in which somehow you persist inflicting on me, by the way you treat me, are at present simply devastating under the terrific pressure of work and of responsibilities. You always made me believe that my work meant something to you and that we are friends. (7)

Was the psychiatrist going to produce the supplement and send in the material for the circular or not? On March 31, Graven sent another telegram:

Alfred wrote back immediately in a long letter, emphasizing again what he needed.(9) No reply. He sent another letter on April 3. He was ready to send the circular materials with his readers’ statements to the printer. He was giving his friend an ultimatum: Graven should either drop him or answer him. (10)

About a week later, Graven finally sent his letter for the circular, and the translation of Tramer’s letter, with no other comment or news. Graven’s letter included the following:


…By direct clinical application, I have found the non-aristotelian principles workable in this enormous group [the mentally disordered]. My observations cover a period of about six years. I shall have a great deal to say about these observations in contributions to medical and scientific journals. (11)

Alfred, still at this late date, was hoping for Graven to write up some of these observations for the supplement as he had promised. He wrote to Graven. Was Graven working on the supplement? How far along had he gone?, etc., etc. No reply. Alfred wrote again on April 15—are you going to produce the supplement, yes or no? About a week later he sent Velda Graven a telegram—was Philip ill? A few days afterwards on April 24, he finally got a telegram from Philip: “Very Overworked Discussed Matters With Carmen Haider She Will Phone You End Of Week.”(12) On April 28, Carmen Haider, a mutual acquaintance, wrote to Alfred suggesting a meeting. Alfred had no time to spare and Mira arranged to meet with her. The news from Philip: he was not going to write the supplement.

In the subsequent correspondence between the two men, Graven never seemed to acknowledge that he had kept Alfred waiting in suspense for weeks because he couldn’t bring himself to say he hadn’t done—and didn’t feel able to do—what he had promised.(13) If only this had been communicated clearly in a timely fashion, it would have been okay with Alfred.(14) Korzybski considered his own word binding. Graven’s approach to communicating with his friend about his inability to follow through with the supplement—an approach of vagueness, avoidance, and delay—must have seemed puzzling to Alfred. Nonetheless, the two men managed to patch up their differences. Graven helped edit the unfinished parts of Science and Sanity over the next few months and seemed timely in his responses. Over the following few years the two men kept in contact. But Korzybski soon began to direct his attention to other interested psychiatrists who seemed more willing and able to follow through with commitments they had made about developing applications of his work.

You may download a pdf of all of the book's reference notes (including a note on primary source material and abbreviations used) from the link labeled Notes on the Contents page. The pdf of the Bibliography, linked on the Contents page contains full information on referenced books and articles.
4. AK to Philip S. Graven (Telegram), 3/7/1933. AKDA 30.393.

Return to Table of Contents
Posted by Bruce Kodish at 9:54 PM