Soon after he arrived in town, a feature story about him appeared in the January 23, 1935 morning issue of the Kansas City Times. The newspaper account gives a plausible portrayal—in keeping with other accounts and private letters of the time—of Korzybski’s appearance and state of mind. “The man who is so pessimistic that he has become an optimist stirred the human cauldron in a visit with friends at the Barstow school last night and laughed. It was so funny so tragically funny.” The newspaper article continued:


The whole world has been fooling around near the animal level because of assumptions based on the stupid definitions of words. And there was Count Alfred Korzybski, bald and dramatic, who has laid the foundation for a new start in a book,...“I am an optimist because I have reached the climax of pessimism and am ready to do something about it,” he said. “The old way of thought is hopeless, but there is another way. I am an optimist because I am so pessimistic that I doubt the doubts.”

With a cane in one hand, wielded in the manner of the Polish nobleman, he took a few strides around the room. He is lame as a result of wounds received when he was a staff officer in the Russian army. Stupid, wasn’t it? By the way, there is an incident in connection with war which proves even Count Korzybski retains a few of the animal reactions...You know the experiments of Pavlov with his dogs. A bell would ring, food would be produced and the dog’s saliva would flow. After a time the saliva would flow at the ringing of the bell, regardless of the food. Bell—saliva, Count Korzybski likes to repeat the formula, bell—saliva; it explains so much of human response here on the near-animal level.

The animalistic response retained by Korzybski is tears. Whenever he thinks about the war, the tears flow. Last night he demonstrated. He started thinking of horrors, blinked his eyes a few times and there, sure enough, were tears. Purely mechanical. He explained that all the time he was thinking he was in a perfectly happy state of mind.

The Korzybski attitude, however is not so simple as that. He called it simple as he sat laughing at the abject horror in the human cauldron; but his hearers had to take a few long breaths and look blank from time to time. 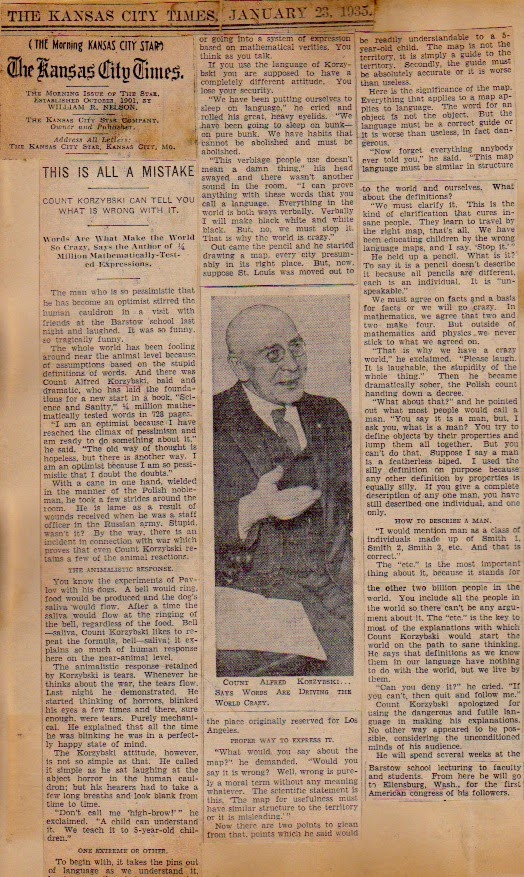 You may download a pdf of all of the book's reference notes (including a note on primary source material and abbreviations used) from the link labeled Notes on the Contents page. The pdf of the Bibliography, linked on the Contents page contains full information on referenced books and articles.
11. “This Is All A Mistake”. The Kansas City Times, 1/23/1935. AKDA 2.742.


Return to Table of Contents
Posted by Bruce Kodish at 9:46 AM

Email ThisBlogThis!Share to TwitterShare to FacebookShare to Pinterest
Labels: Chapter 44 - On The Road, Korzybski: A Biography (Free Online Edition)