Chapter 41 - What Had Alfred Wrought?: Part 2 - A System of Systems 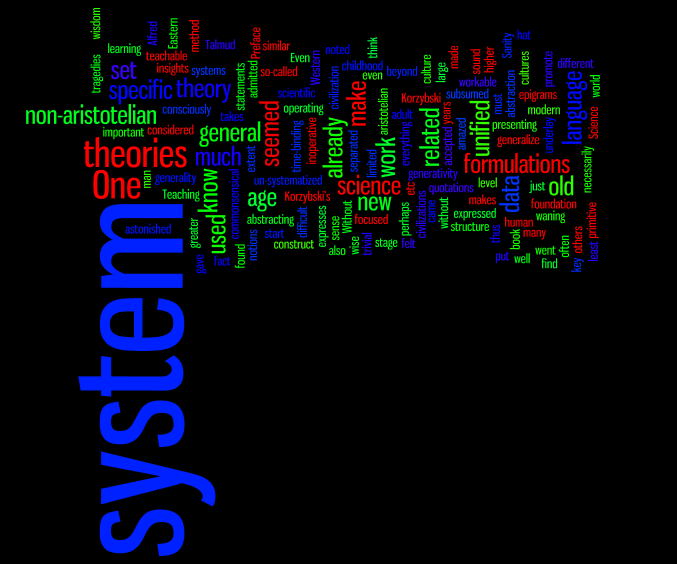 He had a system, a set of related formulations focused on how we know what we ‘think’ we know. One of the quotations he had put at the start of his Preface came from the Talmud: “Teaching without a system makes learning difficult.” He had accepted that. Without the system, much of the data used in Science and Sanity could be considered “old hat” and many of its insights “commonsensical” or even “trivial”. Alfred had already admitted as much in the book, “One is amazed to find that ‘everything has already been said’, and that, to a large extent, these important, separated statements were inoperative.”(4) But if he had a sound system it would generalize the un-systematized data and wisdom of others and thus make it teachable as a method to promote time-binding. As he noted,


One of the human tragedies can be found in the fact that wise epigrams do not work. It takes a system which often expresses similar notions; but they must be expressed in a unified language of different structure to make them workable. (5)

Korzybski’s unified language of “abstracting”, etc., necessarily had greater generality and this seemed key; it made his work a system in a sense that went beyond just a set of related formulations.*(6) It gave his non-aristotelian system—a theory about theories, a system about systems—generativity; it could be consciously used to construct new theories for a ‘scientific’ adult age—a new operating system for world culture, a foundation for a science of man. Even he felt astonished.
*Korzybski was presenting his non-aristotelian system as not only more general—at a higher level of abstraction—than any specific theory of the modern age, it also seemed more general as a system: it subsumed the more limited aristotelian system that underlay specific theories of the old and waning ‘childhood’ stage of at least 2000 years of Western science and civilization (and perhaps of so-called ‘primitive’ cultures and Eastern civilizations as well).

You may download a pdf of all of the book's reference notes (including a note on primary source material and abbreviations used) from the link labeled Notes on the Contents page. The pdf of the Bibliography, linked on the Contents page contains full information on referenced books and articles.
4. Korzybski 1994 (1933), p. 408. 4.


Return to Table of Contents
Posted by Bruce Kodish at 3:31 PM

Email ThisBlogThis!Share to TwitterShare to FacebookShare to Pinterest
Labels: Chapter 41 - What Had Alfred Wrought?, Korzybski: A Biography (Free Online Edition)