The move to Cambridge seemed full of sunshine and promise. Alfred had a budding seminar career, a coterie of close professional students in psychiatry and education, and increasing possibilities for getting serious financial support. Yet in his personal life as well as his work, fog and darkness had rolled in. He had sailed into dangerous waters.

To produce the work of his two books, he’d labored for years with a dogged determination bordering on obsessiveness. Since then, he had worked with an equally ferocious intensity to show the potential of his work and to promote and teach it. But his tendency to make heroic effort habitual had led to habitual personal strain. His persistence in pursuing his vision at times crossed the line into blind rigidity. While holding up a mirror to Mira and to some of his students, he had failed to sufficiently hold up a mirror to himself. He was heading into potentially serious troubles for his health, his work, and his marriage. Alcohol may have played a part.

For most of his life, even during prohibition when he brewed his own ale, Alfred ‘had not been a non-drinker’, as he sometimes phrased it. And Mira was not a teetotaler and did not disapprove of moderate drinking. But according to her (and I give her statements some credence), Alfred’s alcohol use started to become a problem for him—and her—around 1931 as he felt increasing pressure to complete Science and Sanity. At this time he started drinking to relax and to help him sleep. Apparently he sometimes drank alone. Mira would observe the results. More than once she had come home to find him intoxicated or difficult to arouse from an afternoon nap. Sometimes, intoxicated, he would break into tears before her from the burdens he felt he was carrying. Sometimes, thus disposed, he would harangue her about her faults. Although he would apologize afterwards, this kind of behavior recurred. She had hoped things would change after the book came out, but they didn’t. During the period from the publication of Science and Sanity until the move to Cambridge in 1936, it’s not clear how much or how frequently he drank or how often he became seriously intoxicated. (In letters he wrote to Mira later that year, Alfred briefly acknowledged “drinking troubles” which he assured her were over.) But even when he didn’t drink or at least was not visibly drunk, she found him more and more tense, impatient and critical. Life with the man she so loved and idolized had become increasingly thorny.

Although his alcohol use apparently made the problems between Alfred and Mira worse, it seems likely they would have arisen whether or not he drank. For Alfred had come to focus primarily on what he perceived as Mira’s negative qualities while ignoring or downplaying her virtues. He consistently told her he had done what he did for her, and continued to work so hard primarily for her benefit. He also never hesitated to say he would not have written his two main works without her support and encouragement. But he seemed to have forgotten the extent to which her active help—not only financial and moral support—had contributed to them as well. Mira had served for years as the main sounding board for Alfred’s formulating. Her innocent, intuitive questions, reflections, and advice nigh undoubtedly helped him to develop his work from the beginning. But at this point, Mira—progressively more conscious of the quality of her own intelligence (quite different in style from Alfred’s)—had gotten into a seemingly un-winnable position with him.

She had always regretted missing out on a college education and considered that she had a sloppy ‘thinker’. To put this right, she had aspired to learn as much as she could from her husband. Thus, she considered herself his student as well as his wife—as did he. By 1936, this probably was not the best way for either of them to look at their relationship, since Alfred seemed to have difficulty pulling himself out of the role of the teacher whose job it was to find her faults and correct them.

Alfred agreed with Mira about her sloppy ‘thinker’. She had once confused Buffalo with Albany and he grabbed onto this verbal slip. ‘Buffalo-Albany’ became a term he used to refer to what to him seemed her habitual tendency to confuse map-territory relations, her disregard (as far as he was concerned) for hard facts. For years he brought up ‘Buffalo-Albany’ to her when they had a disagreement. Among his ongoing and repeated criticisms (in letters and conversations with her)—besides her non-extensional ‘Buffalo-Albany’ ways—were the inexact manner with which she talked about his work to others, and her tendency for dramatic self-presentation in public (what he referred to as her ‘Sarah Bernhardt’ style) which he considered damaging to his scientific reputation. He had trouble considering the possibility that he might at times overgeneralize about these, making mountains out of molehills.

Certainly, given her lack of formal education, particularly in science and mathematics, she was not going to be a scientific expositer of Alfred’s work. But having already become familiar with his assessments of her, I felt surprised by the extent of the mismatch I found between his evaluations of her and what I gathered about her as I read their personal correspondence, as well as some of Mira’s other writings. I was struck with her talent for astute observation, her gift for apt metaphor for sizing up a situation or person, and her general playfulness with language and life. I was also repeatedly struck with the depth of her personal application of the extensional methods she had learned from Alfred, her concerted efforts to understand herself and her relationships, her openness to criticism, her hunger for knowledge, her original elaborations of Alfred’s formulations, and her often wise advice to him. Even more striking was Korzybski’s apparent blindness to much of this. He loved her dearly. He may have been right about a great deal in regard to her faults (she agreed with him about these to a remarkable extent). But he seriously underestimated her for years. After the move to Cambridge the problems in their relationship began to come to a head.
In the last week of June, with boxes still unpacked, he left for the seminar he was giving at Northwestern University from July 1 to August 15. After Mira saw him off at the train station, she was feeling especially miserable, alone, and cut off. The period around the move had been tense. She felt disturbed by whatever he said before he left. Despite her confused feelings, she missed him. She began to write to him almost immediately. Not having heard much from him (he may have sent one letter a few days after he left) she began to feel more concerned. In a way she considered general semantics as much her child as it was his. She worried he was going to drive himself too hard, drink too much, lose control, and as a result compromise the success of his seminars and the possibilities for getting financial support. Still not hearing from him, she wrote a letter to John Lynn on July 8, detailing the history of their troubles, including Alfred’s use of alcohol, and pleading with Lynn (and Campbell and Congdon) to be on the alert. It was the first time she had revealed these problems to anyone. Lynn forwarded the letter to his colleagues in Chicago.(13)


Within a day of this, Mira got a letter from Alfred, who had been extremely busy. Everything was going fine in Chicago. She seemed relieved. Perhaps she had worried needlessly. Indeed, in his lectures—the transcriptions of which I have seen—he seemed well-organized and in tip-top form. The seminar had many interested participants and he was asked to come back the following year. But perhaps Mira’s letter did have some effect. The seminar organizers, Campbell and Congdon, having been forewarned by her letter (which Alfred didn’t know about) may have kept an extra-vigilant watch on him to try to keep him in line. At any rate, from this point forward, Mira and Alfred settled down to a somewhat regular and congenial exchange of letters.

You may download a pdf of all of the book's reference notes (including a note on primary source material and abbreviations used) from the link labeled Notes on the Contents page. The pdf of the Bibliography, linked on the Contents page contains full information on referenced books and articles.
13. MEK to John G. Lynn, 7/8/1936. MEK Archives, Box 17. 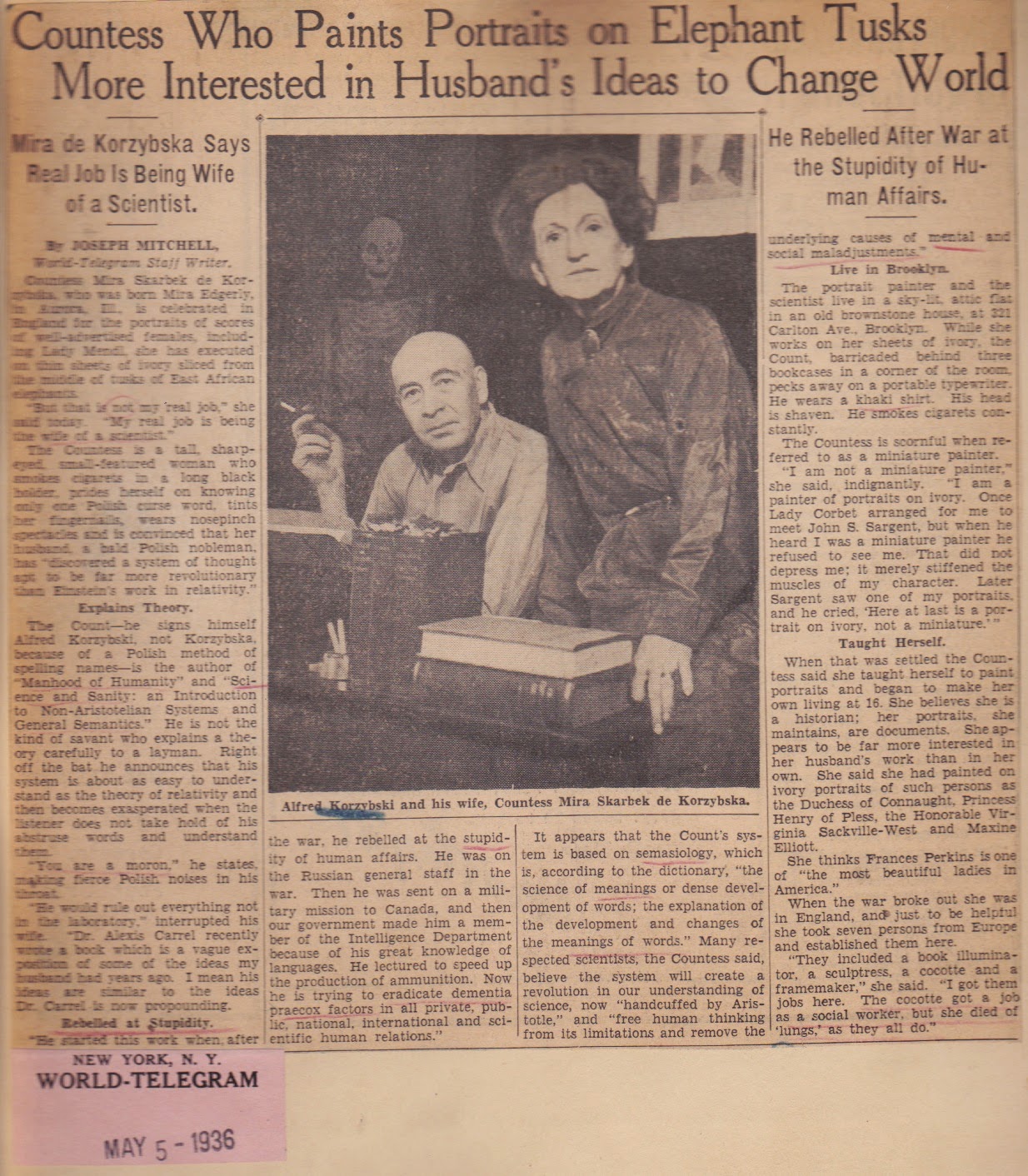 
Return to Table of Contents
Posted by Bruce Kodish at 4:41 PM

Email ThisBlogThis!Share to TwitterShare to FacebookShare to Pinterest
Labels: Chapter 46 - "Shoot All The Mothers!", Korzybski: A Biography (Free Online Edition)