Chapter 62 - "Without Publicity There Is No Prosperity.": Part 3 - Students, Classes, Groups 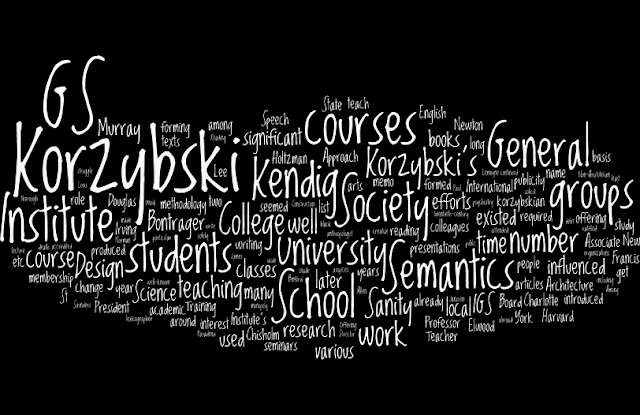 Korzybski had long understood the truth behind the statement later attributed to Russian physicist Yakov Zel’dovich: “Without publicity there is no prosperity.”(21) Korzybski’s name and work had received a lot of publicity by the end of the decade and after years of struggle the Institute of General Semantics, if not prosperous, would at least for a time get financially in the black.(22) Although cartoons, books, as well as newspaper and magazine articles had some role, ultimately the main credit for whatever public interest existed in Korzybski’s work resulted from the unremitting efforts of Korzybski and his colleagues at the Institute and the resultant chain reaction set off by their numerous students.

By the late 1940s, Korzybski had imparted his work to thousands of people from a wide range of academic fields in the sciences, humanities, and arts and from many professions at more than fifty seminars and other lecture presentations. He had counseled and corresponded with many of his students, as well as with a significant number of other intellectual and professional figures—some well-known—from around the world. Close colleagues of his at the Institute, such as Charlotte, Kendig, Francis Chisholm, and Guthrie Janssen, had given additional presentations and classes. Considerable demand existed for Korzybski’s books and other writings of his on the Institute’s publication list. Many of Korzybski’s students and correspondents were now doing research, writing articles and books, and teaching classes that made significant use of the non-aristotelian extensional discipline he had founded. Wendell Johnson, Elwood Murray, and Irving Lee had supervised graduate research significantly influenced by their work with Korzybski. Murray, in particular, had built a significant portion of the University of Denver Speech Communication Department curriculum around a korzybskian core. Institute Workshop staff members, including O. R. Bontrager, head of the Reading Clinic and Teacher Training at the Pennsylvania State Teachers College; lexicographer Allen Walker Read, lecturer in English Linguistics at Columbia University; and visual artist Harry Holtzman, at the Katherine Dunham School of Dance and Theatre (later at Brooklyn College) were applying GS in their courses. (Holtzman, invited by Kendig to teach a popular workshop session on “Non-Verbal Abstracting in the Visual Field” at the 1947 IGS Summer Seminar, had impressed Korzybski and would return to teach at subsequent seminar-workshops for a number of years.) As a result of the writing, research, and teaching activities of students of Korzybski, students of his students, or those self-taught from reading Science and Sanity and other works—those directly or indirectly influenced by Korzybski influenced many others as well.

For some time, people had written to the IGS asking about academic institutions offering “accredited courses in General Semantics or...training in the methodology as embodied in the teaching of various subject matter courses.” In response to these inquiries, in January 1948, Kendig produced a memo for distribution on “Institutions Offering Work in General Semantics: A Pro-tem Reply and Incomplete List”.(23) She hoped to later get funding to do a more detailed and thorough investigation, but in the meantime the four-page list she put together might surprise those who considered GS solely in terms of language study.

Besides a number of English and Speech professors offering courses, other teachers included: Frank L. Verwiebe at Hamilton College and Frederick H. Binford of Lemoyne College, who used GS in their physics and math courses; Gene V. Chenoweth, who conducted a GS course at the Arthur Jordan Conservatory of Music; and Janice V. Kent at Radford University who applied GS in her art education classes. David Bitzen of the University of Southern California Divinity School used Science and Sanity as a text in his pastoral counseling courses, as did A.P. Guiles of the Andover-Newton Theological School. Douglas Kelley at Bowman Gray School of Medicine and Hervey M. Cleckley, author of The Mask of Sanity, at the University of Georgia Medical School introduced korzybskian methodology in their psychiatry teaching. Douglas E. Wade, College Naturalist at Dartmouth, used GS in his work in ecology. Milton Konvitz, Director of Research and Associate Professor of the New York State School of Labor and Industrial Relations at Cornell University, wrote to Kendig that “he requires the reading of two General Semantics texts in his course called ‘Patterns of Thought’.”

At Harvard, anthropologist Clyde Kluckhohn required either Science and Sanity or “one of the other General Semantics texts in his first year course.” Also at Harvard, Norman T. Newton, Associate Professor of Landscape Architecture at the Graduate School of Design, had introduced GS “in his various courses, especially ‘Construction I’ a required course for students in Architecture, Design, etc.” Around the time Kendig produced her memo, the Institute sent out Newton’s article, “A Non-Aristotelian Approach to Design” as its third membership mailing. Newton had attended a number of seminars with Korzybski, lectured at IGS workshops, and not long after Korzybski’s death, in the “Preface” of his 1951 book An Approach to Design, would write,


I feel a special debt to the memory of Alfred Korzybski, that great and warmly human friend in whose tremendous life-work the attentive student can find implicit what I suspect Korzybski himself was unaware of—a solid basis for a twentieth-century attitude toward the creative arts. (24)


Universities didn’t have a monopoly on GS courses. For example, the Dover, Delaware Public Schools held a GS “Teacher Training Program” over the entire 1947-1948 school year, which combined discussion groups with a series of lectures by James A. Saunders, Madeline Semmelmeyer, Ray Bontrager, and Kendig.

An indication of the widespread diffusion of GS could be seen in the number of study groups and local societies that had already formed or were forming. Groups had already existed for some time in Boston, Chicago, Detroit, Iowa City, Los Angeles, New York, Pasadena, St. Louis, St. Paul, etc. International groups had also formed or were forming in, among other places, Montreal, England, and Australia.

The Society for General Semantics continued making efforts to organize these and other groups under its auspices. In a nod to the expanding interest both in the U.S. and abroad, the Society Board voted in March 1948 to change the name of the organization to the International Society for General Semantics, a change ratified by a mail-in membership vote in May. Korzybski, Kendig, and Charlotte (who between them ran the Institute on a day-to-day basis) had concerns about the Society trying to ‘take over’ the Institute’s role in relation to these groups, as well as other functions. But there seemed little the Institute could do except make connections, offer support, and solicit memberships among the various local groups. And they believed that perhaps efforts to coordinate with the Society could still succeed. Despite the negative and hardly negligible influence of Hayakawa, Korzybski had supporters on the Society Board. Among them, Bontrager, Elwood Murray and Irving Lee, the outgoing President, had done their best to conciliate between the Society and the Institute. And Francis Chisholm, elected President in June, seemed quite intent on finding a way for the two organizations to cooperate more closely regarding local groups and other issues.

You may download a pdf of all of the book's reference notes (including a note on primary source material and abbreviations used) from the link labeled Notes on the Contents page. The pdf of the Bibliography, linked on the Contents page contains full information on referenced books and articles.
21. Rothstein and Sudarshan, p. 115.

Return to Table of Contents
Posted by Bruce Kodish at 7:20 PM

Email ThisBlogThis!Share to TwitterShare to FacebookShare to Pinterest
Labels: Chapter 62 - "Without Publicity There Is No Prosperity.", Korzybski: A Biography (Free Online Edition)