Meanwhile planning had begun for the anticipated big event of 1948, the Third Congress on General Semantics, first announced in the fall of 1947. A postcard to members in February gave the dates and location, October 29 to 31 at the University of Denver, and included a request for getting abstracts to Kendig by March 1. In March, Kendig made another call for papers and announced a Pro Tem Committee for the Congress, with herself and Douglas Kelley as Co-Chairs, Korzybski consulting, and Hansell Baugh assisting them. In April, she took a whirlwind trip for the Institute to Washington D.C.; then to Denver for several days of planning with Elwood Murray and others at the University of Denver; then back to Lime Rock by way of Chicago, where she stopped to see Mira, and met with a number of people from the ISGS to promote—if she could—cooperation with the Institute. She returned to Lime Rock exhausted, but the plans for the Congress seemed well under way. Almost immediately, however, things began to unravel.

It came down to a manpower shortage. Guthrie Janssen had just left the Institute. In a little more than a month, Hansell Baugh, another highly productive member of the IGS staff, would leave. The relative isolation of Lime Rock had begun to wear on him. In April, he had gone on vacation to New York City and the city’s attractions grabbed him and wouldn’t let go. By the time he left the Institute at the start of June, Kendig—awash in contributor’s papers to evaluate—was beginning to drown under them and the growing wave of other programming and planning details. She had committed herself to teach in the first two weeks of Elwood Murray’s five-week Basic Communication Workshop “Evaluation in Communication” at the University of Denver starting July 26 and then would have to rush home for the mid-August IGS seminar-workshop being held in Millbrook, New York. When would she have time to work on the Congress? With Douglas Kelley going to England to represent the Institute for a mid-August International Congress on Mental Health, delaying the Denver Congress until sometime in 1949 seemed inevitable. The delay, until an as-yet-uncertain date the following summer, was announced in early August; although to keep some momentum going, the Committee decided to hold a Congress Colloquium for planners and participants in Chicago over the same weekend in October for which they had planned the Congress.

They met on Saturday evening, October 30, at Abbot Hall on the Chicago Campus of Northwestern University where, after introductions from Kendig, Douglas Kelley, the moderator, explained what the program committee was looking for in papers, i.e., rigorous applications of non-aristotelian methodology. Elwood Murray spoke on the arrangements in Denver and suggested a general theme, “A Method of Integration Without Regimentation”. Each of seventeen people intending to present, gave three-minute summaries of their papers. Although successful, Kendig found her weekend in Chicago fraught with tension: she and Kelley had met with Institute Trustees there and she also conferred with Francis Chisholm and the ISGS Board of Directors on the long sought and frustrating issue of better coordination between the two organizations. After returning to Lime Rock, she collapsed into bed for two days.(12)

Several months earlier, in July, when the October Congress still seemed imminent, Korzybski had come to New York City with Charlotte to get away from the hubbub of the Institute in order to put together an Introduction to the Second Edition of Manhood—but he couldn’t complete it. The trip had started off badly. After their arrival at the train station, a stranger had picked up Alfred’s bag (borrowed from Ralph Hamilton) containing his papers and his copy of Manhood. Visits to the police proved fruitless in getting it back. Then, once they got down to work, Korzybski found the process of formulating the Introduction painful and difficult. They had nice rooms on the 12th floor of Hotel 33 on West 51st Street, a new place for them, across from Radio City Music Hall. Neither of them seemed to have gotten out much; although Charlotte, more mobile, had various items of business to do around town. Alfred spent much of the time in his room reading, mulling, and then talking over the proposed content while Charlotte took notes. He was reading a number of books on Russia, among them, John Fisher’s Why They Behave Like Russians and David Shub’s new biography Lenin, which soon took a prominent place on his recommended reading list for students. Shub, a writer for the Jewish Daily Forward in New York, had participated in the early Russian socialist movement and had known Lenin before 1917. His portrait of Lenin left no doubt that the Stalinist dictatorship of 1948 constituted a logical extension of Lenin’s earlier regime and vision. Both derived not only from Marxism, but also from the heritage of the older Russian autocracy. The book reminded Korzybski of his own days living as a subject of the Tsarist regime, and jogged his formulating about dictatorship from the perspective of time-binding.

By the time he and Charlotte returned to Lime Rock in early August, after rather agonizing efforts, he had a lot of notes Charlotte had taken and, however inadequate, a tentative first draft. Although the front matter of the recently released Third Edition of Science and Sanity had listed a 1948 Second Edition of Manhood under “Volumes Already Published”, the delay of the Congress removed some of the incentive for producing the Introduction so quickly. Korzybski must have felt a measure of relief.

Charlotte described some of Korzybski’s process of working in a letter to Kendig on August 5, just before their return. Alfred had apparently responded somewhat gruffly to something Kendig had said to Charlotte (probably in a phone conversation) that Charlotte, in turn, had conveyed to him. Charlotte didn’t want Kendig to take his reaction personally:


He is so wrapped up in ‘thinking’ that nothing else makes the slightest impression on him. I can barely talk to him myself. He says that his present evaluation of Manhood, introduction, rather, is the most difficult thing he has written since Manhood, more difficult than writing S&S. He now has to include them both in his evaluation. It has been very painful for him, and I get kicked out regularly when he wants to be alone. It is a most frustrating and painful procedure all the way around. No talking, pleading, cajoling, considerations of the seminar [scheduled to start in one week], etc., etc., make the slightest bit of difference. Perhaps that is ‘what it takes’. Perhaps if you and I were like that we would get some creative work done. Well, this is just by way of sympathies, not really trying to be an explanation, but trying to point out that persons – you or I – or situations – the Institute, the seminar – etc., just don’t matter in this instance, and while feelings of bitterness, etc., may be justified from one point of view, from Alfred’s point of view they are un-understandable to him, at least at present. Present things that you and I and others would be deeply concerned in, simply do not enter his consciousness particularly. (13)

Still, whatever his creative agonies and apparent gruffness, he was managing to maintain at least a pinch of humor. On July 30, Charlotte wrote a letter to Kendig, including in the envelope a postcard with the by-then ubiquitous image (non-copyrighted) of the big-eared, gap-toothed smiling boy that Mad Magazine would later take as its mascot “Alfred E. Neuman” in the 1950s. The card had “to MK from AK [and] CS” written on its back. Charlotte ended the letter by referring to the boy’s by-this time equally ubiquitous catchphrase underneath the picture: “Didn’t you love the little ‘What – Me Worry’ card? A. says to send to all our trustees.”(14) 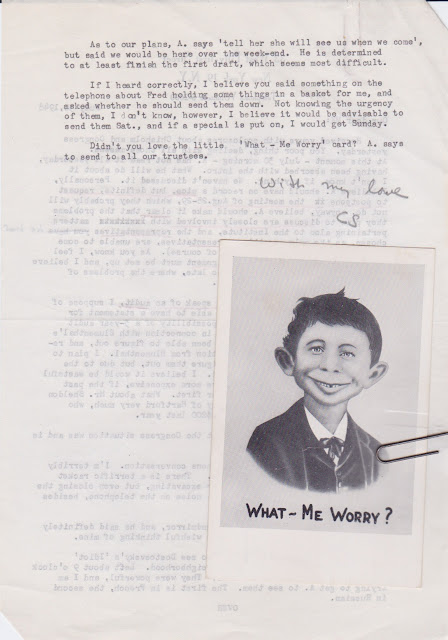 Maybe he had gotten beyond worry, but he certainly seemed to have serious concerns about completing the Introduction and getting out the Second Edition of Manhood of Humanity without further delay. It would take up a major part of his time and effort during his remaining lifetime. Over the next year and a half, he would have several more sojourns in New York City at Hotel 33 for concentrated work on it with Charlotte. He would produce many more drafts of the Introduction and his fussiness about making it as good as possible reflected the importance he gave to it—even as it increased the book’s delay. His concern about clarifying his own intellectual legacy against the background of growing misrepresentations of his work, including those by students—e.g., getting past the confusion of his work with ‘semantics’—probably added impetus to his struggles here. Not surprisingly, more than he had ever done since the earliest days of his work, he would emphasize time-binding in his presentations and writing; stressing its foundational importance to his work, its connections to his subsequent formulations and those of others, and its unexplored implications, particularly in human relations and politics.

You may download a pdf of all of the book's reference notes (including a note on primary source material and abbreviations used) from the link labeled Notes on the Contents page. The pdf of the Bibliography, linked on the Contents page contains full information on referenced books and articles.
12. Kendig to Elwood Murray, 4/ 9/1949. IGS Archives.

Return to Table of Contents
Posted by Bruce Kodish at 6:11 PM