Two presentations he gave in January 1948 reflected Korzybski’s renewed interest in time-binding. Almost as soon as he’d finished the Holiday seminar, he and Charlotte headed for New York City where he gave a lecture at Hunter College on January 9 for the New York Society for General Semantics: “Time-Binding and Human Potentialities: A New Foundation For Human Relations”. The lecture—recorded, transcribed, and later reprinted in Collected Writings—provided an overview of his lifework, seen through the lens of time-binding. He had broached this in writings over the past few years, starting with his ill-fated 1946 Encyclopedia Britannica article. But the Hunter College presentation seemed his most in-depth attempt—since his post-Manhood, pre-S&S writings—to connect later formulations with his earliest work. In the Hunter lecture, he also alluded to an issue he hoped to explore further in his Introduction to Manhood, the relationship between time-binding and democracy :


These issues are so complex; we have not begun to analyze them fully. (1)


The U.S. government had recently released captured German documents on the Nazi-Soviet pact, which divided up Poland between the two totalitarian powers just prior to the start of World War II. Reading of this in the New York Times had gotten Korzybski exercised; he ordered copies of the government document and sent one to Mira, to whom he wrote: “I was nagged many times for what I had to say about the Soviets in S&S; I always classified the Soviet Bigwigs as collaborators of Hitler and many people somehow did not like it. But here it is in black and white.”(2) His disdain for Stalin (still firmly in power) and the Soviet system seemed apparent when he and Charlotte returned to the city at the end of January for his talk at a luncheon given in his honor at the Chatham Hotel celebrating the 10th anniversary of the founding of the Institute of General Semantics, the 15th anniversary of the publication of Science and Sanity, and its to-be-hoped-soon forthcoming Third Edition. The New York Times and The New Yorker magazine covered the event.(3) His short luncheon talk, “Understanding Human Potentialities”, elaborated on the relationship between time-binding and democracy, focusing on the relations between the Western democracies and the Soviet Union. 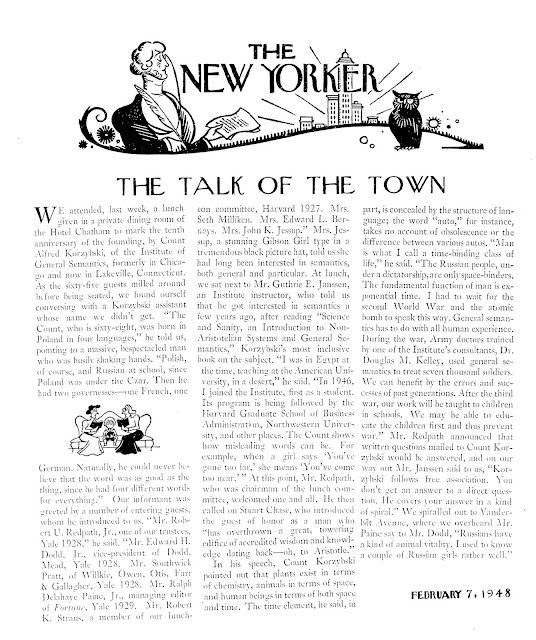 While he might not have seen democratic socialism as an oxymoron, he clearly indicated the incompatibility of democracy with Stalin’s communist government. Consequently, he saw that the Soviet Union had to fail, though perhaps at great human cost to its own subjects and to the citizens from democratic nations who opposed it. The Soviet leadership (Stalin, et al.) accepting the inevitability of ‘class struggle’ and seeking to encourage conflict around the world, appeared inherently aggressive—and inaccessible to boot. Korzybski didn’t see discussions and negotiations changing them.


...We must, therefore, stand firm and be prepared for eventualities. We will find no ‘salvation’ in wishful ‘thinking’ of any sort. For survival we must have predictability; this requires thorough anthropological and socio-cultural studies as to why the Soviet leaders behave as they do. We can then have some measure of prediction as to what they will do and be prepared for it. (4)

Korzybski’s distaste for the Soviet system and its leadership seems even clearer from a detailed nine-page letter he wrote on February 6 to Anatol Rapoport in response to the galleys of an article, “Dialectical Materialism and General Semantics”, that Rapoport had written for the upcoming Winter 1948 issue of ETC. The article showed that Rapoport, though no longer a Communist party member, had remained a Soviet fellow-traveler—albeit one beginning to have second thoughts. In the article he sought to show how “the general semanticist of today can trace his philosophical geneology both to the dialectical materialist, Engels, and to the ‘empiro-criticist’, Mach.” Stalin, he wrote, “has shown a semantic awareness to a far greater extent than his colleagues. He has also definitely stated that in his opinion the East-West conflict is not inevitable.” In the end, Rapoport appeared to have some criticism of Marxist orthodoxy, but wrote as if it could somehow be reformed by an infusion of general semantics.(5)

Korzybski wouldn’t stand for this. He had no problem getting linked with Mach, but otherwise took strong exception to Rapoport’s geneology:


If I may be frank, since childhood I rebelled against the ‘facts’ of our civilization but I never had any use for DM [Dialectical Materialism], as I judge by ‘facts’. To link my work with DM is not only false to fact but genuinely harmful to my work; [p. 2]. ...please do not link GS with DM; it has nothing to do with, and in fact is a protest against DM. (6)

The term “Cold War” had recently come into popular usage, and the policy of “containment” to counter the Soviet Union (including a build-up of U.S. and allied military strength) had begun to get formulated. Korzybski’s anti-Soviet views qualified him as a cold warrior, or at least a ‘cool’ one—focusing as he did on opposing anti-democratic dictatorships of any type, whether ‘communist’ politburos or ‘capitalist’ cartels, rather than on communism per se. The basis for his disdain for the Soviet system seems perhaps most clearly represented in his concern about the persecution of Russian geneticists and the twisting of biological research by Stalin’s ‘Tsar’ for Soviet biology, T. D. Lysenko. Beginning to get significant news coverage in the West, this issue had caught Korzybski’s attention by early 1948 (he had started to clip newspaper articles) and confirmed his views about the incompatibility of dictatorship with optimal time-binding and its expression in the healthy pursuit of knowledge.

You may download a pdf of all of the book's reference notes (including a note on primary source material and abbreviations used) from the link labeled Notes on the Contents page. The pdf of the Bibliography, linked on the Contents page contains full information on referenced books and articles.
1. Korzybski, “Time-Binding and Human Potentialities: A New Foundation For Human Relations”, Alfred Korzybski Collected Writings, p. 630.


Return to Table of Contents
Posted by Bruce Kodish at 1:38 PM