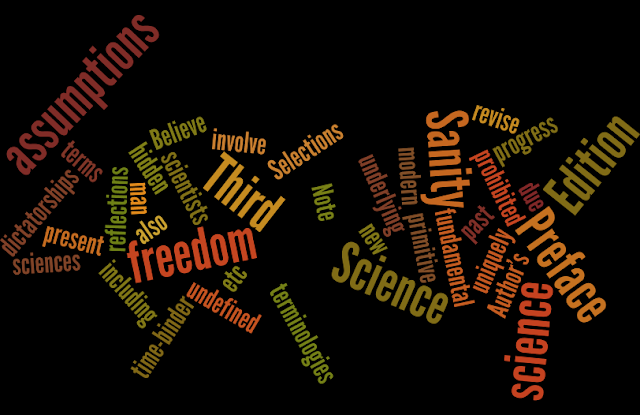 In February, back at the Institute, Korzybski had as his most immediately pressing task getting out Selections from Science and Sanity and the Third Edition of Science and Sanity. That month, he finished his 7-page “Author’s Note” to Selections mainly “dealing with the misinterpretations of general semantics and confusions with semantics.”(7) (As it was going to press, Korzybski added a note on Allen Walker Read’s paper “An Account of the Word ‘Semantics’”, published in August 1948, since it provided supporting data for his efforts to differentiate his work from ‘semantics’.) By the beginning of April, the Institute announced publication and began taking orders for the initial limited printing run of 3000 copies of Selections. As an “experimental” production, it had a plain, blue, thick paper cover showing only the title, so production remained relatively simple. The 274-page volume, with later additions (an index produced by David Bourland that summer and some extra text from S&S put in several decades later) stayed in print for many years and provided an easy-to-handle format of Korzybski’s work for use by university classes and reading groups, perhaps more inviting to those who felt leery about tackling “the blue peril” itself.

The publication of Selections came in time to provide a kind of ‘parting gift’ for its compiler Guthrie Janssen, who got married that month to Guila Beattie and was leaving his employment at the Institute. Jan and Beat were moving to New York City and would be missed. (Although in the fall they ended up returning to Lime Rock to live and would continue involvement with Korzybski and the Institute.) Besides his editorial work, Janssen had served as the Institute’s membership secretary. These duties would be taken over by Maxine K. Mallach, affectionately known as ‘Mac’, a young woman from Lime Rock, who had started working at the Institute in June 1947. Before the war, she had studied at the American Acadamy of Dramatic Arts in New York City, then served as a sergeant in the WACs (the Women’s Army Corps) in New Guinea. After the war, she worked for a business in New Canaan in Southwestern Connecticut before starting as a typist and office assistant at the Institute, an easy walk from her home where she lived with her parents. Having shown exceptional competence in dealing with IGS office intricacies, she soon became Kendig’s assistant and the seminar registrar before taking over Janssen’s duties as membership secretary as well. With great fondness for Korzybski and esteem for his work, Mac would continue working devotedly for the Institute, over a span of four decades, playing a pivotal role in keeping the IGS operating during some later lean and rather difficult times.

Real pressure existed to get out the Third Edition of Science and Sanity as soon as possible. A letter from Mira on January 16 reflected the wide interest and demand for the book:


Alfred my dearest one: –

How a great idea makes strange people kin, to which add this strange coincidence. This noon I was struggling to open the front door and get food bag in when a young woman did both for me and carried the heavy bag up to Apt. *When lo and behold* I saw S&S on her arm. She lives in small apt. just south of this on the alley; is librarian in science library * that smallish bldg Charlotte will remember near lily pond at a 59th St. entrance. It seems that there are 4 copies of 1st Ed. And 4 copies of 2nd ed. and always a waiting list for S&S. The last one of the list was so disappointed that when later a copy came in she grabbed it to satisfy her curiosity and was enthralled at the combination of my being your wife and the beautiful things here. Her husband is a butcher and apparently has had a very limited existence. She offered to bring any books from that library, [I] immediately remembered two on arthritis. Such eager young people are pleasure. (8)


In March, pretty much done with Selections, Alfred, Charlotte, and others worked on page proofs for the Third Edition’s new and revised front material and on its new jacket cover, which would include a quote from his ‘credo’, “What I Believe”, that he was in the process of finishing:

The progress of modern science, including the new science of man as a time-binder, has been due uniquely to the freedom of scientists to revise their fundamental assumptions, terminologies, undefined terms, which involve hidden assumptions, etc., underlying our reflections, a freedom prohibited in ‘primitive sciences’ and also in dictatorships, past and present. (9)

He had written “What I Believe”, at the invitation of Indian author/editor Krishna M. Talgeri for a book The Faith I Live By, a “symposium” of essays with a list of invitees besides Korzybski that included Gandhi, Nehru, and Montessori, among others. The book seems never to have gotten published. Nonetheless, Korzybski would make good use of the essay; besides using a quote from it for the S&S cover, he would later have the essay printed for distribution to Members of the Institute in September 1949 and include it in the content to add to the Second Edition of Manhood. As he wrote in a letter to Members that accompanied that September 1949 mailing, “What I Believe” was “really a summary of my whole life work. ...”(10)

The essay touched briefly, even impressionistically, on major themes in his work, connecting them to the overarching theme of time-binding. Topics included: discussion of his personal background and purposes in developing the notion of ‘time-binding’; understanding not statistical averages but human potentialities within a theoretical ‘deductive’ framework as the sine qua non for an applied ‘science of man’; the consequent importance of studying human reactions at their best and worst; time-binding and dictatorships; adequate versus inadequate linguistic and grammatical structures and the necessity of developing an adequate “unified terminology of evaluation” for a science of man; the overwhelming importance of “non-verbal, or what I call silent levels” and a working “consciousness of the differences between...the silent and the verbal levels, [as] the key and perhaps the first step for the solution of human problems”; the role in human knowledge of “relations, as factors of structure” and of postulational methods; religions and sciences; the importance of inferential knowledge; and the significance of “self-reflexive and circular mechanisms” as “the uniquely human types of reaction which made our human achievements possible.” He concluded by discussing the historical importance for humans of becoming conscious of their capacities as time-binders: “...this consciousness may now mark a new period in our evolution.”(11)

By the end of April, the Institute had reprints of Korzybski’s new “Preface To The Third Edition 1948” to send as its latest mailing to members. And by the end of May, the Institute received its first copies of the Third Edition, although most of the 5000 books from this first printing would be stored with a firm in New York City. Science Press, the book’s printer, had changed ownership and management and, under the new name of Business Press, would no longer serve as the Institute’s distributor. The Institute office processed orders, printed shipping labels, and sent them to the New York firm, which did the wrapping and shipping. 1,000 back-ordered copies went out immediately and the remaining books sold quickly, approximately 4000 over the next year, a quarter of the total copies sold since the book’s original 1933 publication. By the end of 1948, Charlotte was scrambling to arrange a second printing, which included getting a new printer and getting the printer’s plates shipped from Business/Science Press, etc. (The second printing, ready by May 1949, sold equally quickly, requiring a third printing in 1950.) Mira wrote to Alfred, telling of her pride and delight at seeing a copy in the window of a nearby bookshop. Unlike many of the delayed projects and unmet deadlines that had plagued the Institute since its inception, the publication of the Third Edition of Science and Sanity had come through as announced at the January luncheon.

You may download a pdf of all of the book's reference notes (including a note on primary source material and abbreviations used) from the link labeled Notes on the Contents page. The pdf of the Bibliography, linked on the Contents page contains full information on referenced books and articles.
7. Korzybski. “Author’s Note” to Selections from Science and Sanity in Alfred Korzybski Collected Writings, p. 615.

Return to Table of Contents
Posted by Bruce Kodish at 6:51 PM